Yoga: this is how it transforms body and mind from the first lesson onwards 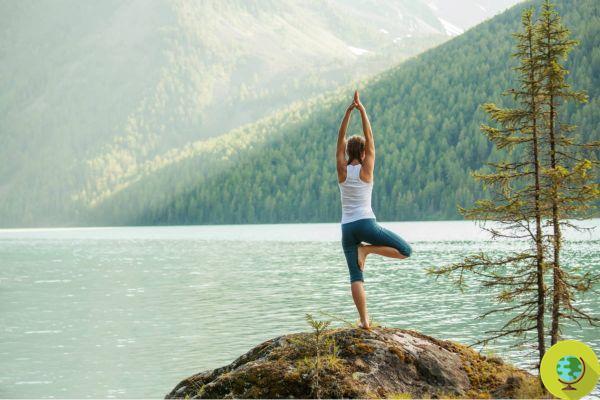 The practice of Yoga transforms the body and mind from the first lesson onwards. In recent years, scientific research has focused on the beneficial effects of Yoga for our health, with particular reference to some types of practice, such as Hatha Yoga, Bikram Yoga and Yoga Iyengar.

I benefits of Yoga they are evident from the very first lessons. Often those who approach the practice are looking for more Relaxing and in this case, research confirms the reduction of stress levels as one of the main benefits of Yoga, probably also thanks to the relaxation and breathing techniques that can accompany the asanas.

Here are some of the many positive transformations which could be encountered over time by those who decide to approach Yoga and carry out a regular and constant practice to fully enjoy its benefits.

FROM THE FIRST LESSONS

After 20 minutes of practicing Hatha Yoga - based mainly on asanas - an improvement in cognitive functions, an increase in attention and memory at work can be found, as demonstrated by a study ofUniversity of Illinois in which participants who practiced yoga performed better on brain function tests than another group of people who did 20 minutes of aerobics.

Yoga helps relieve stress. This power likely stems from its ability to reduce the activity of proteins known to play a role in the inflammatory process, according to a study published by researchers at theUniversity of California.

Altering the expression of genes

Un small studio conducted in Norway has suggested that many health benefits of Yoga may be related to its ability to modify the expression of the genes of immune cells.

Uno study recently conducted at Colorado State University found that the Bikram yoga - with specific reference to performing 26 positions in 90 minutes in a heated room - it helps increase flexibility shoulders, back and knees. According to the same research, it also helps to develop greater endurance and reduce body fat.

Decide to practicing Yoga every day, or at least on a regular basis, it helps to establish new habits which can concern both self-care and other areas of one's life. Yoga stimulates willpower and the desire to improve oneself with constant commitment, it teaches not to be too rigid with oneself but at the same time not to let oneself go to laziness, to recognize one's limits and understand how to overcome them in case is necessary.

AFTER A FEW MONTHS

People with mild or moderate hypertension could benefit from practicing Yoga, as one points out study of the University of Pennsylvania. The researchers found that people who practiced yoga, compared to those who participated in a nutritional program, could enjoy a greater reduction in blood pressure.

A little study conducted at Ball State University found that practice Hatha Yoga for 15 weeks could significantly increase vital lung capacity, which is the maximum amount of air exhaled after taking a deep breath.

A study conducted in Harvard in 2009 showed that Yoga can help increase both desire that the sexual satisfaction, with particular reference to women, also because it would help them to be more familiar with your body.

A German study published in The Journal of Pain showed that four weeks of practice Iyengar Yoga (a type of Yoga that emphasizes the importance of aligning the different parts of the body in asanas and that uses supports, such as straps and bricks) is effective in reducing the intensity of pain in adults suffering from chronic neck pain.

Uno study conducted in 2010 by researchers from Boston University showed thatand 12 weeks of Yoga practice could contribute to reduce anxiety and to increase the levels of gamma-aminobutyric acid in the brain. Low levels of this substance are related to ailments such as anxiety and depression.

Add Yoga to the tips to follow for diabetes management it can help make blood sugar levels more constant, according to one study published in Diabetes Care in 2011. Furthermore, just three months of practice would lead to a decrease in the body mass index, a factor that would help reduce blood sugar levels. Experts point out that yoga should accompany other forms of regular physical activity - and not replace them - particularly in patients with both type 2 diabetes and obesity.

According to one study conducted in 2008 at Temple University, follow a designed Iyengar Yoga program for the elderly can be helpful to improve balance and oper to help prevent falls in women over the age of 65.

AFTER YEARS OF PRACTICE

Uno pilot study conducted in 2009 by Loren Fishman proved that practicing Yoga can improve bone density, with particular reference to older people. A group of seniors were monitored for bone density before and after a practice cycle of Yoga lessons lasting two years. An increase in bone density was found in those who had practiced, while in the control group, which had not dedicated themselves to Yoga, a reduction was found, just as would commonly be expected in older people over the years.

The researchers of Fred Hutchinson Cancer Research Center Seattle found an association between regular yoga practice and body weight reduction - or maintaining a healthy and stable weight - among more than 15 healthy middle-aged people.

Reduction of the risk of heart disease

As an integral part of one healthy lifestyle, Yoga can help reduce cardiovascular risk factors, such as high blood pressure, high cholesterol, and blood sugar levels. According to experts from Harvard, Yoga would be as good for heart and cardiovascular health as other physical activities, including cycling.

add a comment of Yoga: this is how it transforms body and mind from the first lesson onwards