Yes to swimming in the sea or in the pool: no contagion in the water thanks to salt, chlorine and ultraviolet rays 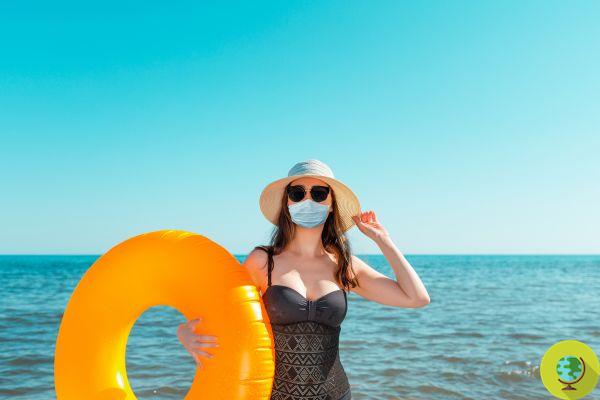 Coronavirus, is it possible to be infected at the sea or in a swimming pool? Very unlikely, as long as social distancing measures are respected.

Coronavirus, is it possible to be infected at the sea or in a swimming pool? Very unlikely, as long as social distancing measures are respected. This is what the experts of the Spanish Higher Scientific Research Council (Csic) say, which in a report analyze the transmission of the SARS-CoV-2 virus in spaces intended for bathing and other aquatic activities.


In the study, the researchers conclude that the main routes of infection remain, even in these places, respiratory secretions caused by coughing or sneezing and person-to-person contact and emphasize that, by maintaining distances, sea water and swimming pools presents no risks. On the other hand, untreated fresh water could transmit the virus, while it remains established that the disinfection of beaches remains an absolutely useless and harmful practice for the environment:

Disinfection of the beaches: we avoid unnecessary environmental destruction, there is no scientific confirmation that it works!

Basically, according to Spanish experts, only the gatherings that can occur in swimming pools and beaches, as well as the use of everyday objects, can continue to act as a contagion mechanism. Other possible contagion routes examined are those derived from the presence of the virus in the wastewater that can reach the bathing water bodies and the survival of the virus from bathers in nearby waters, sands and surfaces.

Specifically, according to the CSIC report:

Of the same opinion also Nicola Petrosillo, director of the clinical and research department of Infectious Diseases of the Spallanzani hospital, who during a video conference said:

“Even if an infected were to take a bath then it would disperse the virus in the water. In the sea everything is diluted ". Of course it is better not to swim face to face with another person, but sea water is not in itself a vehicle of infection ”.

In addition, salt water would also help make the virus harmless as well as chlorine in swimming pools. As for the sand, in order for the infection to occur, a sudden passage in the respiratory tract of a person would be needed, which is really difficult.

The Turkish professor of virology at the Pharmacy Faculty of Monastir Mahjoub Al-Awni is also of the same opinion, who last Tuesday declared in a note to the Tunis Africa news agency that "sea water and swimming pools do not transmit the infection of SarsCov2, but the gatherings and the lack of respect for physical distance when swimming or sitting by the sea are all behaviors that would significantly increase the infection ". Also according to Al-Awni:

"Sea water contains a high percentage of salt and other disinfectants such as" iodine "while swimming pool water is mixed with chlorine, and therefore the outer membrane of the coronavirus loses its effectiveness, making it unable to penetrate into the cells of the human body even if it managed to penetrate into the nose or mouth. Furthermore, exposing more parts of the body to sunlight while swimming would provide significant amounts of vitamin D, which plays an important role in improving immunity "

We will say, therefore, all in all, that if we ever manage to go to the beach for a while this year, we could breathe a sigh of relief that - even if distant from each other - we will be able to take a peaceful bath.

add a comment of Yes to swimming in the sea or in the pool: no contagion in the water thanks to salt, chlorine and ultraviolet rays