Studies denying the relationship between eggs and high cholesterol may be the result of industry-funded research. To say it is a meta-analysis

Do eggs raise cholesterol levels? Research denying this relationship could be the product of industry-funded studies and thus the result of a conflict of interest. To say it is a new meta-analysis.


A new review study published in the American Journal of Lifestyle Medicine shows that research funded by the egg industry minimizes the danger associated with rising cholesterol from eating this food.

Supporting this are researchers from the Physicians Committee for Responsible Medicine (PCRM), an advocacy organization that promotes a plant-based diet. The team looked at 153 studies published from 1950 to March 2019 that evaluated the effect of eggs on blood cholesterol levels. The researchers also focused on who had funded the research and whether those sources had somehow influenced the study results.

The findings show that the percentage of industry-funded studies has increased over time, from 0% in the 50s to 60% from 2010 to 2019, according to study author Neal Barnard, associate professor of medicine at George Washington University. and president of the PCRM:

"In recent years, the egg industry has tried to neutralize the unhealthy image of eggs as a cholesterol-raising product by funding further studies and distorting the interpretation of the results," Barnard said bluntly. 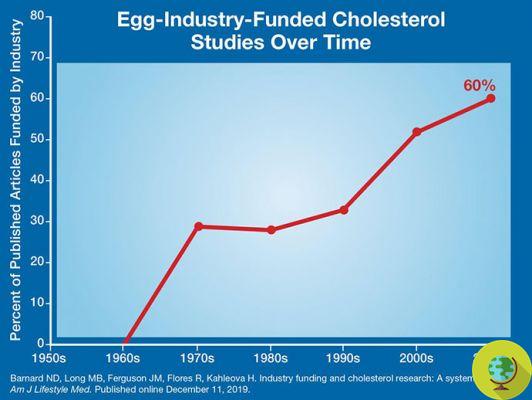 Overall, over 85% of the studies, whether funded by industry or not, showed that eggs have adverse effects on blood cholesterol. Industry-funded research, however, was more likely to downplay these findings. That is, although the study data showed an increase in cholesterol, the findings often reported that the eggs had no effect. About half (49%) of industry-funded studies reported conclusions conflicting with actual research results, compared with 13% of non-industry-funded studies.

And the authors cite a 2014 study of college freshmen at Wayne State University as a concrete example. On that occasion, the students were asked to have two eggs for breakfast 5 days a week for 14 weeks. This high consumption was associated with an average LDL cholesterol, known as "bad" cholesterol, increased by 15 milligrams per deciliter of blood. Despite this, what did the researchers conclude?

The evidence was practically denied. They could have said, as Barnard argued, that the change in cholesterol did not reach statistical significance, either because the sample size was too small or that the increase was due to chance. Instead, they wrote that the increases did not occur at all and this, according to him, would be attributable to bad faith.

The biggest problem is that these studies then influence international guidelines and recommendations which, following the results showing the harmlessness of eggs on the cholesterol factor, in some cases have greatly softened the official positions regarding the consumption of these foods. .

We really don't know who to trust anymore ...

It's easy to say ketogenic diet! Tips to make it a little healthier ❯