Yam: properties and uses of yam

Dioscorea, also known as yam or yam, represents a genus of plants grown in all tropical regions of the world for food purposes. It produces a variety of starchy tubers that resemble sweet potatoes.

Lo yamthe yam, it's a tuber rich in starch produced by plants of the genus Discorea. The term Yam designates both the plant and the tuber consumed as food.


In North America and Quebec, what is commonly cooked and called yam or yam is actually a sweet potato. Therefore not to be confused real yam with American sweet potatoes.

The word yam comes from the english yam or from the Spanish ñame. Discorea is a perennial herbaceous plant with heart-shaped leaves and greenish-yellow flowers.

Yam grows mainly in rocky and desert regions, with particular reference to Mexico, Texas, Central Africa and eastern China. His cultivation it also occurs in the Caribbean, Latin America and Oceania.

There are many varieties of yams that can differ depending on the region in which they are grown. Unlike the cassava (also known as tapioca or cassava), most yam varieties do not contain toxic substances. However, there are some exceptions. From the bitter varieties of yam potentially toxic substances are eliminated by leaving the tubers to soak in salt water.

Usually the bitter variety of yam they are not consumed, except in the event of famine. The bitter varieties of Yam in Malaysia and Indonesia are used for the preparation of potions and poisons. 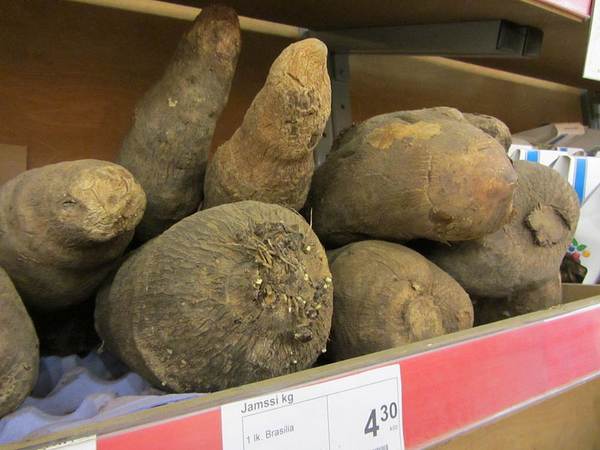 The consumption of yam is widespread in Africa, where this tuber is a source of protein. Of all the tubers and roots, the protein content of yam and potatoes is the highest and accounts for about 2% of the weight of the fresh product. However, yam does not contain all the proteins necessary for our body, so it must be combined with other foods for complete nutrition.

Yam, or yam, is a source of potassium, Vitamin B6 e Vitamin C. It provides our body with about 110 calories per 100 grams. Contains good levels of manganese, thiamine and plant fibers. It has a low fat and sodium content. Compared to potatoes, it generally has a lower glycemic index. 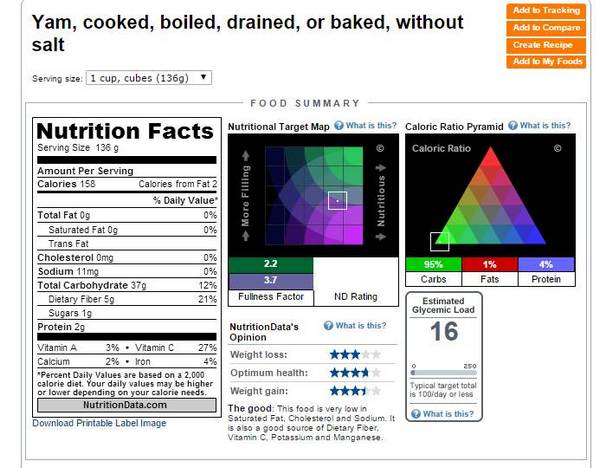 Lo yam africano (Discorea sp) contains thiocyanate a substance that potentially has a protective role against thesickle cell anemia. In Niger and West Africa, Yam plays a very important nutritional role, providing more than 200 calories a day for over 150 million people. Its cultivation is a source of income not to be underestimated for farmers.

The cultivation of yam is widespread in poor areas of Africa. It is a very resistant plant and available all year round, unlike other less reliable seasonal crops.

In Africa the tuber of the yam it is cooked before being eaten. The yam can be boiled, fried or roasted. It is served with tasty sauces but also used to prepare desserts. In Nigeria yam is dried and ground into a powder that is used to make soups and puddings, while a variety of yams in Philippines it is the basis of the preparation of a local dessert, called halo-halo.

Lo yam in Japan instead it is eaten raw and grated. Diosgenin is obtained from the rhizome of some yam varieties, a substance that is used for the preparation of corticosteroids and oral contraceptives.

Have you ever tasted this tuber, perhaps during one of your travels?

SWEET POTATO IS GENETICALLY MODIFIED BY NATURE: THE STRANGE CASE OF A "NATURAL GMO"

SWEET POTATO CREAM AND CHOCOLATE: THREE INGREDIENTS FOR A SWEET THAT WILL AMAZE YOU

Yoga: 5 asanas to practice in the office ❯

add a comment of Yam: properties and uses of yam