Wind turbines: do they really release microplastics and BPA that enter the food chain? 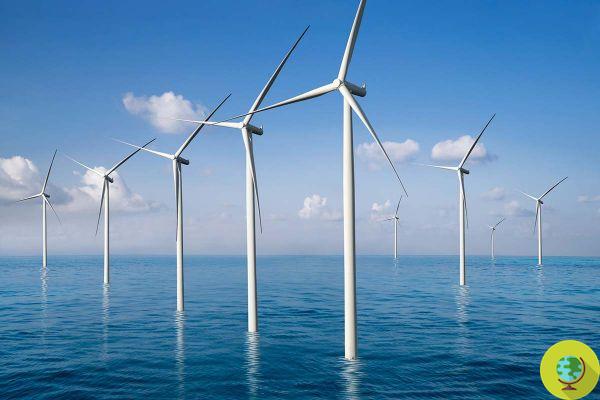 According to a Norwegian paper, Bpa from wind turbines enters the food chain through microplastics

We are now surrounded by all kinds of pollutants that we also find in food and in the most unthinkable objects. Research conducted in Norway focuses on possible contamination caused by the use of wind turbines, these would release microplastics capable of acting as a "Trojan horse" for dangerous pollutants such as bisphenol A.


The Norwegian Environmental Protection Agency, Green Warriors of Norway / Norges Miljøvernforbund (NMF), in a document sent to the ECHA European Chemicals Agency in response to the consultation on the environmental deterioration of bisphenol A, raises several concerns. Specifically, these concern the increase in the use in wind turbines of BPA and other chemicals that can then end up in the environment and in the food chain.

The turbines, according to the Norwegian agency, are made up mostly of glass fibers and resin in which BPA is also present, a substance of which we have spoken several times about its dangerousness and diffusion. Read also: BPA: we are probably exposed to Bisphenol A much more than we always thought

The problem that concerns these devices for wind energy is that the blades, subjected to atmospheric events (especially if positioned in the sea), can release microplastics which, inside them, contain Bisphenol A.

Generally the BPA in the environment degrades quickly but in this case the microplastics protect it and act a bit as a "trojan horse", allowing it to "live longer" with risks that affect in particular marine organisms and, consequently , the food chain.

In practice, the fish would ingest microplastics dispersed into the environment by the turbines and which also contain traces of Bisphenol A within them. During digestion, the acids release BPA which can therefore penetrate the organism of these animals.

A preliminary study has shown, in the case of rainbow trout, that BPA is capable of causing damage to reproduction for several generations.

The replica of the companies that produce wind turbines

Sigrid Carstairs, member of the board of directors of Swedish Windpower, wrote a post on Linkedin regarding these two issues:

There is currently no scientific evidence to offer a consensus that wind turbines increase microplastic pollution. Let's be clear about this, wind turbines contain plastic, but not the kind of plastic you would find in microplastics, which comes from thermoplastics, commonly found in acrylic, polyester, polypropylene, polystyrene, nylon and Teflon. Wind turbine blades are actually made of composite materials and make up about 70% fiberglass (made of sand) and 30% thermoset plastic.

And then he adds, citing a study conducted at the Rudong (China) offshore wind farm that studied plastic pollution in the immediate vicinity of the plant:

On the question of the BPA he writes instead:

The turbine blades, made up exclusively of glass fiber, epoxy glue and in some cases carbon fiber, are the most exposed to wear. From what we currently know, a maximum of 150 grams will be "ground" by a larger wind turbine during a year, and it is mostly paint that is poured from the blades; that is, chemically inactive polymer particles that do not release chemicals into nature (Norwea, 2021). Hence, there is no chance that BPA will be released from the paint.

The outer layers of a wind turbine are designed so that they do not contain epoxy glue, although there may be traces. The reason we choose not to include epoxy glue in the outer layers is because we know that it is this part that is exposed to weather wear. However, even if there was epoxy glue in the outer layers of the turbine, guess what? Expoxy glue does not contain BPA at all. What could be a residue are microscopic traces of the chemical process of making epoxy glue, and BPA is used in this process. So BPA is present in the manufacturing process, yes, but there are no emissions of the material in nature as the final product simply does not contain it (Norwea, 2021). Therefore, it would be very difficult to release a substance that is not there.

There is undoubtedly a need for greater clarity on the question.

Tumors, a henna tattoo to give women a smile ❯

add a comment of Wind turbines: do they really release microplastics and BPA that enter the food chain?