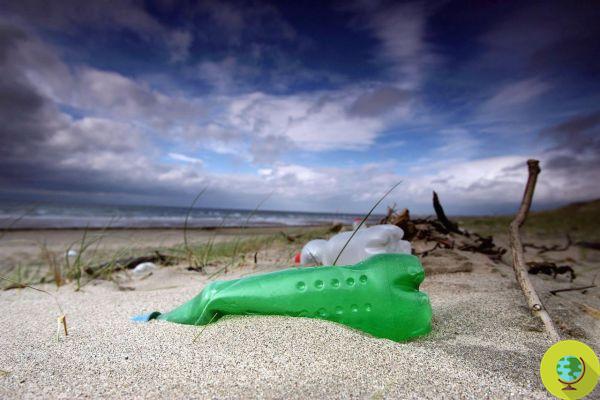 Will a plastic-eating bacterium save seas and oceans from pollution? Every year 311 million tons of plastic are produced worldwide, of which 90% is obtained from oil, while only 14% is sent for recycling. How to solve the problem?


Un bacterium eats plastic Will it save seas and oceans from pollution? Every year 311 million tons of plastic are produced worldwide, of which 90% is obtained from oil, while only 14% is sent for recycling. How to solve the problem?

A group of Japanese researchers has identified a bacterium capable of 'eating' plastic. This bacterium is indeed capable of break the bonds of PET, the material that is usually used to make plastic bottles.

Lo study in question was published in the journal Science. The researchers found that most of the plastic produced in the world it degrades very slowly and for this very reason it represents a serious environmental risk, especially for the oceans, where plastic waste endangers ecosystems and the life of aquatic animals.

To at least partially stem the problem of dependence on oil, researchers believe we should produce biodegradable plastic da renewables - but it would still not be a definitive solution to get rid of plastic completely.

Therefore, thanks to the most recent studies, scientists have identified a bacterium that would be able to completely degrade the most used type of plastic in the world, namely PET.

Il bacterium Ideonella sakaiensis 201-F6 has developed enzymes capable of breaking down PET. Is this perhaps nature's answer to the problem of palstics that we have accumulated over the last century?

Even in this case, however, we would not be able to solve the problem of plastic at 100%, given that space, tools and resources would have to be invested in any case to create special structures where to degrade the PET thanks to the action of a bacterium, which would be able to make it disappear in just 6 weeks. Instead, we already have the facilities available for recycle PET.

The stratagem that exploits the action of the plastic-eating bacterium appears to us useful to reduce the presence of plastic in the seas and oceans but we should not forget that PET at this moment can already be recycled and reused for other purposes - the clothing industry recycles it to create textile fibers, for example.

This avoids completely destroying a material that was created from an expensive, critical and difficult-to-manage resource such as Petroleum. The only strategy to reduce waste would therefore be produce less plastic? Should we increase and improve PET recycling? And we can really do without plastic? This is certainly not a simple challenge. Only with time will we understand if the plastic-eating bacterium can really help us.

BONUS EXCHANGE PLASTIC BOTTLES: WHERE TO FIND COMPACTORS TO EARN WITH DIFFERENTIATED

5 WAYS TO EARN WITH RECYCLING AND SEPARATE COLLECTION

PAPER FROM THE RECYCLING OF PLASTIC BOTTLES

Where do I throw the Christmas tree? Here's how to dispose of it properly, real or fake

add a comment of Will a plastic-eating bacterium save the sea from pollution?