Prevention is better than cure, and this cancer cure study proves it once again. In fact, although medical science has made great strides in recent years and has allowed many cancer patients to recover from the disease and have a longer life expectancy, the most effective weapon to fight cancer remains that of prevention. .

A new study conducted in the UK has shown that i proton pump inhibitor drugs, commonly used for the treatment of ulcer and acid reflux would be related to a increased risk of developing a form of stomach cancer: this risk would increase exponentially, in line with the duration of drug treatment, up to doubling.

The study followed a sample of over 63.000 patients over a three-year period between 2012 and 2015: during this period, 3.271 patients took proton pump inhibitors, while 21.729 took H2 blocking drugs. At the end of the follow-up period, 153 people were diagnosed with stomach cancer: those who took the inhibitors had twice the risk of developing the disease than those who took H2 blocking drugs.

What we have told you about is not the first study that has investigated a possible correlation between the use of proton pump inhibitors (PPIs) and the onset of stomach cancer: a research conducted in 2019 has shown that, thanks to their powerful suppressing action of gastric acids, PPIs induce changes within the gastric environment - such as hypergastrinemia and hyperplasia of enterochromaffin cells. Such changes would increase the risk of developing cancer. 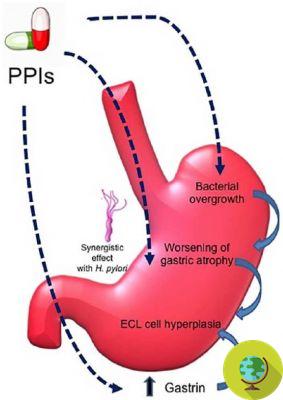 Stomach cancer is the fifth most prevalent cancer and third leading cause of cancer mortality in the world. Referred to as a "fast-growing cancer", it rarely produces noticeable symptoms in its early stages, and is currently difficult or impossible to treat effectively; moreover, the life expectancy for sufferers is much shorter than for other cancers.

This is why prevention and research for early diagnosis are very important and represent the only valid weapon at the moment to save the lives of many people. In addition to taking proton pump inhibitor drugs, there are several factors that increase the risk of developing this disease - including excessive alcohol or tobacco consumption and a diet rich in processed foods and high in salt.

Medicines, cosmetics and supplements: how to save online and have safe products ❯