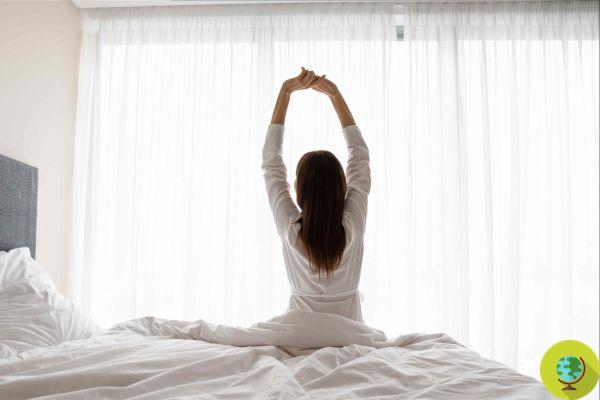 Can't sleep for 8 hours straight as recommended by experts? Don't worry, this type of rest could be definitely overrated. Indeed, scientific evidence suggests that human sleep was once discontinuous and based on two phases. But what is really the best way to rest?


Current sleep guidelines from the National Sleep Foundation recommend that the average adult get seven to nine hours of sleep each night. In fact, many people can't sleep at all for that long or all these hours in a row. This could be a consequence of our past, or rather that of our ancestors.

For men living in the pre-industrial era, sleep was a completely different matter. Historian Roger Ekirch, a professor at Virginia Tech in the United States, writes in a study published in The American Historical Review that until the modern era, during the night, most Western Europeans were awake for an hour or more.

But the most amazing thing is that during those waking moments between sleeps, a sort of mini-day took place:

“Families got out of bed to urinate, smoke tobacco and even visit neighbors. Staying in bed, many people made love, prayed and, most importantly, reflected on the dreams that typically preceded waking from their 'first sleep' ”writes Professor Ekirch.

In other words, segmented (or biphasic) sleep was the norm. It therefore seems that sleeping long hours in a row is a relatively recent trend.

The story of sleep

In order to conclude that in the past the moment of sleep was very different from today, Ekirch analyzed a great variety of sources (diaries, depositions, literature, etc.) that cited the ways of rest of human beings who lived before the eighteenth century. .

The historian thus highlighted that the initial sleep segment was often referred to as the "first sleep". The second period of sleep, on the other hand, was referred to as the "second" or "morning sleep". Both phases lasted approximately the same amount of time.

But why has this sleep pattern changed over time?

Professor Ekirch explains that it could have been the changes in modern life, much more affluent and comfortable. In fact, in our rooms we have artificial light available whenever we need it and the temperature is controlled. These could be some of the reasons that have "disconnected" our sleep from the natural daily and seasonal rhythms.

In fact, Ekirch argues that the sleep pattern of previous societies is the one best suited to our nature and our needs. But what does scientific research say about it?

A team of anthropologists and ethnographers found that non-Western cultures that lived without artificial light in the late XNUMXth and early XNUMXth centuries were still experiencing the "first" and "second" stages of sleep. In an experiment, the psychiatrist Thomas Wehr then wanted to verify what was happening depriving some people of artificial light at night for several weeks. He thus found out that their sleep became biphasic and usually divided into two periods, lasting several hours, with a waking interval of 1-3 hours between them.

Taking advantage of modern technology, and especially wearable devices that measure activity, other researchers wanted to monitor the sleep patterns of modern hunter-gatherers and farmers living without electricity. The goal was to discover the ways of rest in societies that do not have artificial lights available.

The results of these studies, however, were mixed. Research conducted in Tanzania, Namibia and Bolivia found that people in each location had similar sleep patterns, characterized by a long rest period and no evidence of segmented sleep.

Another study published in 2019 compared the sleep patterns of farmers in indigenous villages (with and without electric lighting) on ​​the island of Tanna in the South Pacific island nation of Vanuatu. The researchers found that despite artificial evening light delaying and shortening rest, the island's indigenous inhabitants largely had a monophasic, uninterrupted sleep.

However, a 2017 study of an electricity-free rural society in Madagascar found that villagers had a "strikingly similar" sleep pattern to the first and second sleep patterns. After midnight, both men and women in the village had a peak of activity on 49% of the nights recorded (with 43% of the inhabitants reporting that they woke up to use the bathroom).

In short, the research has come to conflicting conclusions that could also be due to differences in temperature, duration of daylight and lifestyle. So It is unclear whether segmented sleep is indeed the most natural way to sleep. If the variables are many, perhaps it is true that each of us has his own way to rest at best.

What do you think? Could you sleep, interrupting your sleep for 1 or more hours to do something else?

Why you should never go to sleep with socks on, even if it's cold ❯