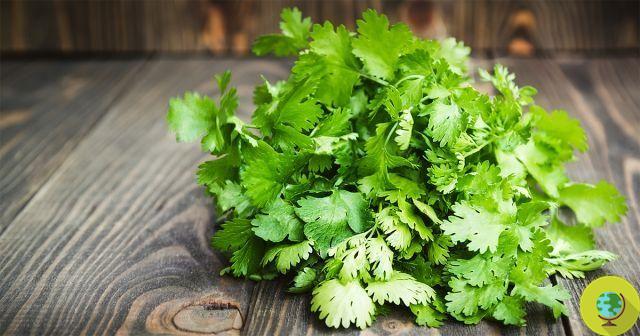 Coriander, also called Chinese parsley and often known by the Spanish name cilantro, is an annual herbaceous plant of the Apiaceae (or Umbelliferae) family. It has many culinary uses and many beneficial properties, but not everyone likes it. Because?

Il coriander, also called Chinese parsley and often known by its Spanish name cilantro, is an annual herbaceous plant of the Apiaceae family (or Umbelliferae). It has many culinary uses and many beneficial properties, but not everyone likes it. Because?


People often hate cilantro because they credit it with a aftertaste of soap. Thanks to a new SciShow video, we finally have found out why.
“Il flavor that is felt in coriander it has a lot to do with our genes, ”says Hank Green, explaining that, after carrying out some independent studies, scientists were able to precisely define the main enemies of coriander in a common group of olfactory receptor genes. called OR6A2.

Indeed, the OR6A2 gene expresses a receptor that is activated by chemicals belonging to the group of aldehydes. Not surprisingly, these are the same substances that are also found in soap. If you're also on the anti-coriander faction, at least now you can say it's not entirely your fault. Better to choose parsley.

If, on the other hand, the coriander you like it, know that, in addition to using it to flavor in the kitchen, you can use it as an infusion against stomach pains. In addition, it is also recommended for problems with aerophagia and migraines, aids digestion and has a function antidiarroica.