Why are women more "chilly" than men? Scientists discover an ancestral cause 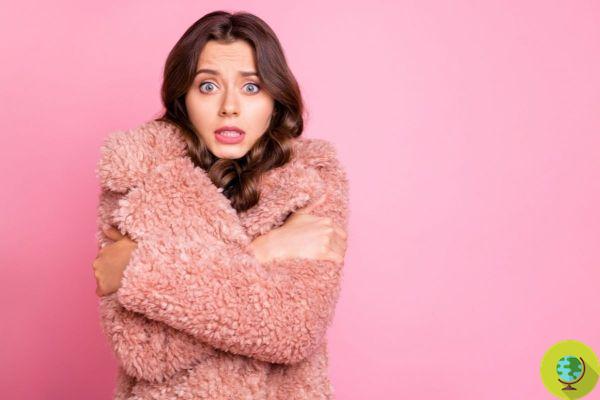 Why do women feel colder than men? It would be all a matter of genetics and evolutionary improvement of the species, according to this study


Science has finally found out why men and women always quarrel over settings for air conditioning or heating: it's all evolution's fault. A team of scientists from Tel Aviv University questioned why not only women, but also females of other warm-blooded animal species, tend to feel colder than their male companions. The study, which lasted more than forty years and now published, observed 13 species of birds and 18 species of bats, and suggests that animal species have a better chance of survival if males and females keep their distance from each other.

Different preferences regarding temperature reflect differences in the nervous system - explained study author Dr. They were Levin, in an interview with The Times of Israel. - Males and females perceive pain differently, and similarly have different perceptions of heat and cold. As a result, they often keep their distance, each looking for their ideal temperature.

This is a common behavior among birds and bats, for example: male bats prefer to fly at higher altitudes (in the mountains) in search of low temperatures, while females prefer the valley, where the temperature is higher. This is also true in the case of migratory birds, which spend their life stages outside the breeding season separately: males spend the winter in cooler places and females in warmer places. (Read also: Men and women: so different because of 6500 genes)

The climatic preference is shown very advantageous for the evolution of the species, because it causes a separation of the two sexes outside the breeding season - which reduces the competition of the males for the conquest of the females or for the supply of food and the aggression directed towards the females and the pups. But there is also another advantage. The females, who take care of the offspring, are more sensitive to changes in temperatures that can damage the puppies (who are not able to self-regulate their body temperature): having a greater sensitivity to cold, they are more stimulated to warm their young . This also explains why females tend to have and desire more physical contact, while males prefer to "keep their distance" and are reluctant to physicality.

So, let's not get angry if our partner still sleeps with the sheet while we have already switched to the duvet, or if he would never want to turn on the stove and radiators: let's take advantage of this moment to be put some distance away so that everyone can enjoy (individually ) for a little peace of mind at the desired temperature.

Fonti: Global Ecology and Biogeography / The Times of Israel

Why does pee smell after eating asparagus? ❯

add a comment of Why are women more "chilly" than men? Scientists discover an ancestral cause