WHO, pollution kills 1 in 4 children

Killer pollution, the new bitter confirmation of the WHO arrives. Air and water pollution has serious consequences for everyone and in particular for children, who are among the most fragile subjects.

Killer pollution, the new bitter confirmation of the WHO arrives. L'pollution air and water has serious consequences on everyone and in particular on children, which are among the most fragile subjects.


The World Health Organization has released a new report that pollution is the worst enemy of children and is responsible for death of 1 in 4 children under five years old.

Children are killed by diseases such as pneumonia, diarrhea and malaria, serious problems that could be prevented if there was greater attention to the environment, especially in the most disadvantaged areas of the world and where pollution is more present.

According to the WHO, the exposure of the child to pollution already occurs through the mother, in the course of pregnancy.

“A polluted environment is deadly, particularly for young children. Their organs and their developing immune systems, their still growing bodies and shorter respiratory tracts make them vulnerable to polluted water and air ”- stressed Margaret Chan, WHO director general.

Here are what they are, according to the WHO, the major causes of death for children under the age of five:

WHO points out that the situation is worsening due to climate change, rising global temperatures and carbon dioxide levels that are favoring air pollution. 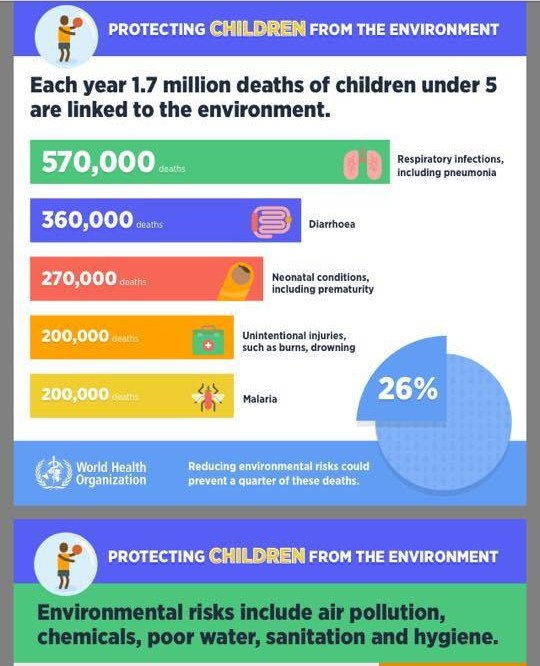 Children are mainly exposed to polluted air, unsafe water, secondhand smoke, contaminated food and potentially dangerous chemicals around them. According to the WHO, prompt action is needed to reduce the causes of pollution, diseases and dangers for children.

Read also: HOW TO PROTECT THE LUNGS FROM AIR POLLUTION: 10 REMEDIES AND TIPS

Here are some of solutions to be adopted immediately according to WHO suggestions:

Following these points, WHO is developing a plan to make children's living conditions safer by 2030. Everyone can participate, even ordinary citizens, to help make the air more breathable, starting from our homes.

Read the WHO report on children and pollution here.

WHO: new guidelines for the consumption of sodium and potassium ❯

add a comment of WHO, pollution kills 1 in 4 children