Where do I throw the Christmas tree? Here's how to dispose of it properly, real or fake 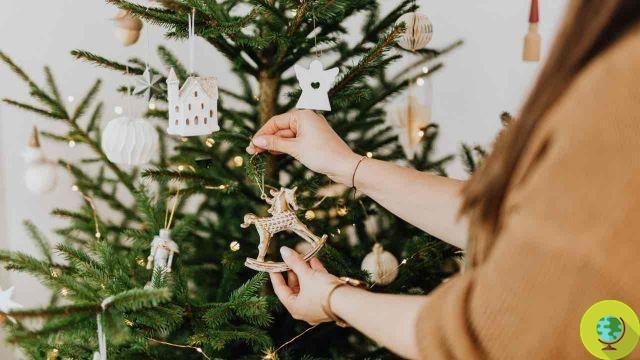 After the holidays, the question arises: where do I throw the Christmas tree? Here's how to dispose of it properly

After the holidays, the question arises: where do I throw the Christmas tree? Here's how to dispose of it properly


One of the problems of the end of the holidays is the large amount of waste that are created after these periods. However, if most of these have their place in the recycling bins, theChristmas tree remains for many still a mystery.

Perhaps it has never been well explained to us how this Christmas symbol should be disposed of correctly, but there are rules to follow that it is good to know sooner or later. First of all, a distinction must be made between real and fake fir and in the latter case some clarifications.

The real fir, if it has roots, can be planted in the garden or even in the garden. It is still a living plant, because you should give it away. The fir, however, should not be planted spontaneously in a wood or in the forests because, in addition to almost certainly perishing, it would be a foreign element there.

If, on the other hand, the tree is coppice, that is, without roots, it must be disposed of as green rejection. In some municipalities there is a special separate collection for greenery and twigs. If yours does not have it, then the spruce should be taken to the ecological station.

For those who have bought an organic fir, with or without roots, and do not have a green thumb, they can always recycle your tree in many ways:

Synthetic fir is one thorny question since although it is made of plastic, it should not be thrown away as you might think in the collection of plastic.

Tutto it depends on your municipality. If it is small, some municipalities allow it to be thrown into the unsorted bin, but others do not. If the synthetic tree is quite large, it must be taken to the nearest ecological station which will take care of the disposal.

Synthetic trees pollute much more than the real ones for that if you own one, you should seriously think about opting for a more ecological and sustainable choice. It is worth it not only for the Planet, but also for you with all these nice recycles.

“A natural tree must be given together with mowing and pruning, if you do not have the possibility of replanting it in the garden. A fake tree, on the other hand, is considered a cumbersome waste, even if it would be good to reuse it as much as possible over the years ”, reiterates Junker, the App that helps us sorting out.

Where are the Easter egg packaging thrown away? ❯

add a comment of Where do I throw the Christmas tree? Here's how to dispose of it properly, real or fake