When the father is absent: the emotional wounds of the children

Unfortunately, it happens that some people have a disastrous relationship with their father or that they have to do with an absent or emotionally closed father who has never liked to show his affection for his children.

Unfortunately, it happens that some people have a disastrous relationship with their father or have to deal with a absent father or emotionally closed who has never liked to show his affection for his children.


We all need a father and his absence leaves us with emotional wounds that tend to generate ambivalent reactions in our professional and personal life. For example, those who have not grown up seeing their parents get along well with each other may have a difficult time getting involved in the life of a couple.

Fear of couple life it is very common in those who have lived without the constant presence of the father, due to work reasons, a separation, an illness or a bereavement, just to name a few examples.

Women may feel wary of their partner and men may feel unequal to leading a regular life as a couple. Furthermore, women could project the figure of the father onto that of the partner and not be able to live a relationship calmly enough.

The presence of a loving father during childhood is synonymous with protection, food, health, love, education and benefits the healthy development of the child's personality and his need to belong to a family group, for which he will feel the desire to become parents when they enter adult life.

The figure of the absent father could generate some emotional wounds in children, who may feel abandoned even as an adult.

Read also: 5 EMOTIONAL WOUNDS THAT PREVENT US FROM LIVING QUIETLY

The physical absence of the father could generate, especially in the daughters, an intense fear of abandonment within the couple's life. They may have a tendency to choke on their partner in order to try to keep them tied to them forever and ever don't let it escape. The love relationship could become an addictive relationship.

When in the relationship with the father the emotional sphere is very neglected during early childhood or adolescence, there is a risk of missing an important term of comparison, both for sons and daughters, as regards the realization of one's emotional needs and the awareness of the importance of having a united family. With an emotionally absent father, children sense that they are not loved or accepted as they would like and may feel that way even in relation to other people outside the family, such as friends or teachers. Children risk carrying 'the wound of the unloved' with them into adult life.

Read also: THE SWEET ILLUSTRATIONS ABOUT LOVE BETWEEN A DAD AND HIS CHILD 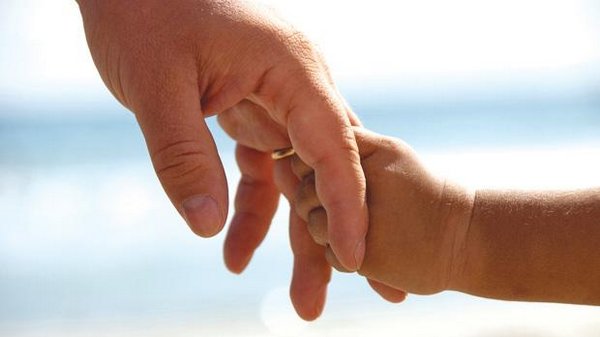 There are situations in which the father is present in the family but in the most wrong way possible since it is a violent person who does not look at his wife or his sons or daughters in the face when he wants to express his anger. The wounds in this case can be very deep with repercussions both physically and emotionally. In the sons and daughters a real one could be generated aversion to authoritarian and oppressive figures, not to mention the state of fear that could re-emerge during relationships with others in adulthood.

The father may be absent from the family due to a separation or divorce e time to spend with children may not be enough to allow them to spend a peaceful childhood and adolescence. Divorced parents sometimes try to fill the physical and emotional void with gifts, trips, days at the mall, phone calls, but all of this is not enough to repair the damage.

Mourning in the family

When the father passes away due to bereavement we are facing the most serious situation because, unlike the previous situations, in this case it is not really possible to remedy the situation of absence. The mother will have to take on the difficult and delicate role of comforting the children and educating them despite the absence of the father. Children may carry the fear of abandonment with them for a long time, even as adults.

Read also: FESTIVAL OF THE FATHER: HOW TO DO WHEN THE FATHER IS NOT THERE

Recover the relationship with the father?

Over the years, relationships and people change. As adults you may want to try to reconnect with a father who has been absent in the past or you may find yourself having to communicate with him because of some urgency or important matter. From adult to adult, perhaps you can at least try to recover enough to achieve a cordial relationship. If, on the other hand, recovering the relationship with the father is impossible, whatever the reason, the advice is to try to let off steam by writing down everything you feel, as in a letter addressed to the absent father. It's just a small tip but it might help you clear your mind for a few moments and feel better.

add a comment of When the father is absent: the emotional wounds of the children