What's inside the Chicken McNuggets? McDonald's explains it in a video 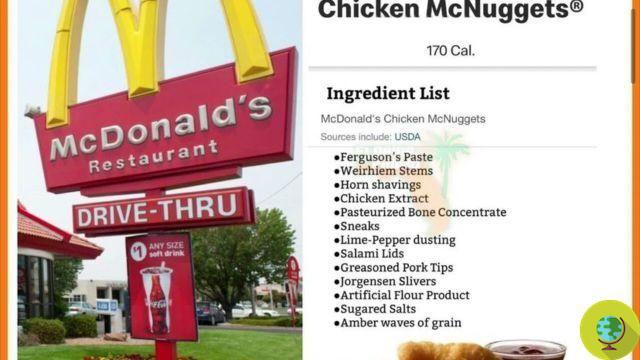 What's really inside Chicken McNuggets, McDonald's chicken nuggets? Maybe you have been wondering for some time. We had already told you in part about it, when a study in the American Journal of Medicine revealed that the nuggets contain chicken meat, but only half of them.

What's really inside i Chicken McNuggets, the chicken nuggets of McDonald's? Maybe you have been wondering for some time. Partly we already told you about it, when a study in the American Journal of Medicine revealed that the nuggets contain chicken meat, but only 50%. In response to that film that went around the world, the multinational, in order to regain credibility and raise the declining turnover, decided to explain itself how Chicken McNuggets are made.

McDonald's recently started one transparency campaign to explain directly to consumers - who can interact directly with the company via Twitter - the origin and type of ingredients used in fast food kitchens.

And here is a video ready that explains, from the point of view of the well-known multinational, how the famous chicken nuggets are prepared, also to distance ourselves from the pink slime scandal, the "pink slime" that had indignant the industrial meat market in the USA and that in the video the company denies the category by stating that chicken really exists in Chicken McNuggets. Can we rest assured then?

McDonald's would be facing un slump in sales worldwide. The crisis would also affect the United States, home of the main fast food multinational. The tactic of transparency would help the company to regain the trust of consumers, who are now increasingly attentive to the origin of the ingredients and the composition of the foods.

It is rather suspicious that McDonald's has decided di be more transparent just in a moment of black crisis. The multinational in this way perhaps hopes to attract new consumers or to win back the favor of those who have frequented fast food restaurants for years. Certainly this video about chicken nuggets will not positively affect either animal rights activists or those who have decided to stop eating meat. Why is there no mention of how these chickens are raised?

McDonald's transparency campaign had already caught on in Switzerland in the last months. McDonald's Switzerland in April 2014 made public la list of ingredients used as additives in national fast food. It is good to remember that not all McDonald's dishes are prepared in the same way in different countries. There may be variations depending on local food legislation, for example regarding permitted additives.

Here finally McDonald's video about Chicken McNuggets. Will knowing that they actually contain chicken will ever change your point of view on the multinational?

Chicken McNuggets: Do you know what's inside chicken nuggets?
Fast food: here are the foods not recommended by those who work there
The 10 most disgusting 'surprises' found in ready meals and fast food

What makes us happy? These 5 things were identified in 1969 and are still very current ❯

add a comment of What's inside the Chicken McNuggets? McDonald's explains it in a video