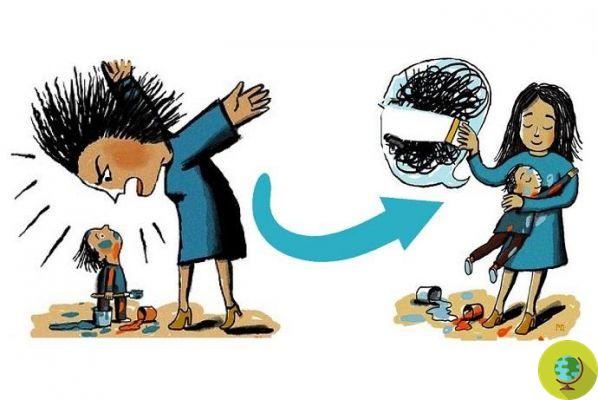 The emotional climate created by parents affects the happiness and self-confidence of their children. The four parenting styles and their effects on children's development.


Tell me which parent you are and I will tell you which child you will grow up: in principle it works like this. In fact, what one becomes depends only in part on predispositions and memories inscribed in personal genetics: the real difference is made by the environment in which one is immersed.

Starting, for children, from parents and their way of carrying out this important and fundamental role.

Considering the "requests" (that is, the indications and control of children's behaviors) and the "responses" (the degree of sensitivity to the emotional and developmental needs that emerge), we can distinguish 4 parenting styles (representing the emotional climate in which the children will grow up): authoritative, authoritarian, permissive, disinterested.

The authority is given by a solid presence, a reference but capable of listening and warmth. Parents who use an authoritative style establish rules, do not fear borders (with their children) but do not fear open dialogue, nor discussion: they use reasoning, take into account the opinions of children. They are affectionate, they represent a clear and supportive point of reference, they encourage independence. They welcome the feelings of their children, while making it clear that adults are ultimately responsible; they dedicate time and energy to prevent inappropriate behaviors and know how to use positive strategies such as praise, reward, appreciation.

Based on Baumrind's research (but not only), children of authoritative parents generally appear happier and more content, develop good self-esteem and are more independent. At school they do better than others; in relationships they demonstrate skillful handling of social skills. They are less prone to depression, anxiety, substance use, and a risk of violent or risky behavior. They are more likely to become responsible adults who are comfortable expressing their opinions and are able to make decisions, evaluating the consequent risks.

The rules, the discipline are at the center of the authoritarian educational style, often accompanied by punishments, when there are violations. This is done because it is done this way, given that the parents command and know what is right: here the dialogue is absent, the children are neither listened to nor accepted in their individualities and needs and feelings, there is practically never flexibility. The warmth of the relationship and genuine attention are lost in a position of authority descended from above and to be respected.

They do not teach the child how to make better choices but rather to make them feel guilty for the mistakes they have made. children sorry for their mistakes.

The impact on children is clear: those born into this type of family tend to have one inner disposition towards unhappiness. They are often insecure children, with low self-esteem, less independent. At school, they tend to do less well than others and are prone to problems with depression, anxiety, substance use. They will more easily manifest few social and relational skills and behavioral problems: they can also become hostile or aggressive. Instead of thinking about how to do things better in the future, they often focus on the anger they feel towards their parents. They can become good liars in an attempt to avoid punishment.

They define very few rules and limits and, in principle, are reluctant to enforce them later: they are permissive parents. Friendly, apparently attentive to the needs and expectations of the little ones but, in reality, they do not know how to say no and do not want to run the risk of disappointing, giving a displeasure, going against their will. They only intervene if there is a really important problem and even if they have promised a "restrictive" measure, they can withdraw it if the child begs them or promises to be good. They tend to embody the more role of "friend" rather than parent.

The absence of clear rules and a request to respect them determines - in the children - a difficulty in following the rules, the practices, the procedures. It will be difficult for them to self-regulate, they can easily tend towards self-centeredness and arrogance. In general they have low interpersonal and social skills.

Finally, there is a style dictated by the inability to take care, by an absent attention: in this case the parents are not interested in setting neither rules nor standards and high demands (unless they concern their well-being and calm). There is a situation, which can be more or less important, of indifference to the needs of children, of absence of involvement in their lives: it is not always intentional, sometimes it depends on the fact that they are overwhelmed by other problems (such as work, family management, having to cope with economic difficulties or situations of illness, personal hardships, etc.). How to recognize them: they are emotionally absent and often even in practical matters (they don't know if their children have homework to do at home or they don't ask how school went; they don't spend much time together, they don't know what their child does, what they are his friends etc.) ..

Children, thus left to themselves and "invisible", they are unable to self-regulate their emotions, they are more impulsive and less happy or unhappy; having few behavioral and value references they can more easily encounter problems of dependence and delinquency and are at greater risk of suicide.

It would seem obvious that one authoritative parenting style produces better results in children and facilitates peaceful growth, greater interpersonal skills and the ability to choose. In principle it works like this but it also depends on how it is concretely implemented, through which actions and choices and practices: different practices, with the same parenting style, can affect the educational outcomes and development of children in different ways.

Furthermore - as has been found in research conducted in various countries - to have a weight, in the development and education of children, there may be more. For example, cultural and ethnic differences and the type of relationship with peers of the same age: A study found that African-American students with authoritative parents but without peer group support failed to perform well in school. As for the Asian-American students, those who performed best had authoritarian parents and, too, the support of their peers.

And then there is the child, its particular individuality: a study has shown, for example, how certain sociable and aggressive behaviors are better related to infantile temperament rather than parenting style. And in this sense, emotional intelligence also plays an important role (the good news is that it can be developed, made to grow).

What parent are you, the test

Ps: for those who want to check which is yours personal mix of parenting style, by clicking here you can reach a quick online test (in English) which provides a useful reading of its facets and consequent “risks” and potential.

Helicopter parents: who they are and why they threaten their children's autonomy

What kind of headache do you have? ❯

add a comment of What parent are you? The 4 educational styles that determine the happiness of children