What lies behind Manuka honey?

We have already told you about Manuka honey, a natural product that comes from afar and is very expensive. In recent years, thanks to its properties, it has earned a good share of the market but what is really hidden behind its production?

We have already talked about the Manuka honey, a natural product that comes from afar and is very expensive. In recent years, thanks to its fantastic properties, it has gained a good share of the market, but what really lies behind its production?


This honey comes exclusively from New Zealand as only there the Manuka plants (Leptospermum scoparium) grow spontaneously from whose flowers the bees extract a precious nectar. Thanks to a series of enzymes present in the saliva of these insects, the extracted substances are transformed and over the course of a few steps they become the real honey we all know.

To produce a teaspoon of Manuka honey, worker bees take a lifetime and to make half a kilo of this product they need to extract nectar from about 2 million flowers.

But why is it so famous? Undoubtedly for its properties that derive from those of the Manuka plants of which various scientific researches have confirmed the antibacterial, antiseptic, digestive, antioxidant, anti-inflammatory and stimulating power of the immune system.

Manuka honey is currently used as sweetener and food supplement but it is included as an active ingredient in some cosmetic products, for example soaps, creams, shampoos, deodorants, etc. But what lies behind its production?

Here are some things you probably don't know: 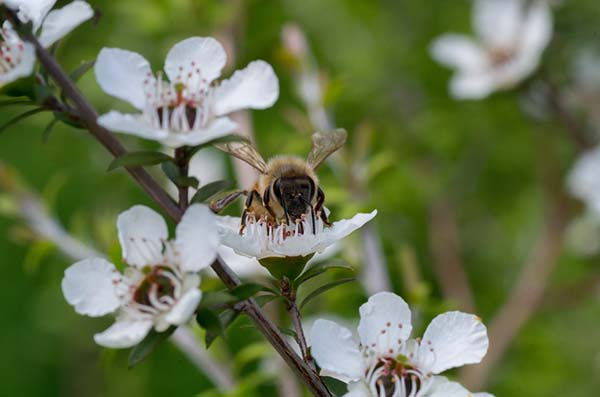 All this of course it is neither ethical nor environmentally sustainable: bees are essential for the reproduction of most plant species and also for the animals that feed on them. 75% of the world's crops depend on pollination, but currently these insects are dying at a rate of 30% per year due to pollution, global warming, pesticides and other factors. The responsibility is obviously always with human beings.

On Manuka honey you may also be interested in:

Do we really need Manuka honey and other types of honey (if produced in the same way)? Whenever possible we therefore choose local honey, produced by small ethical beekeepers or organic honey. Alternatively, to sweeten, we can opt for maple syrup, barley malt, molasses and fair trade cane sugar.

What happens to those who eat garlic every day? ❯

add a comment of What lies behind Manuka honey?