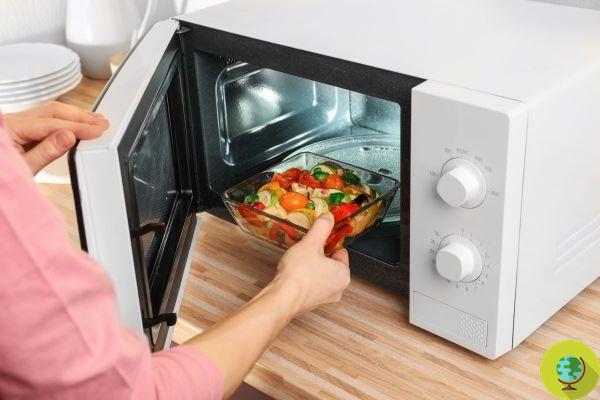 When used correctly, the microwave oven is not dangerous in terms of radiation nor does it expose you to an increased risk of cancer

The microwave is undoubtedly very practical and convenient, in fact it can defrost, cook or heat food in a very short time. But is it also safe? Here's what science thinks about it.


The microwave oven, as is known, uses radiation. Precisely for this reason, despite the convenience and simplicity of use, it is often considered a potentially dangerous object. But how much is it true? And what happens to our body when we eat cooked or microwaved food?

Let's try to answer by citing a series of official national and international sources as well as real scientific research.

It will not be damaged by radiation

The microwave relies on radiation to heat food and there are those who believe that these can end up in the food or be dangerous for the people who use the oven, given the proximity to the appliance. Not so according to the Food & Drug Administration (FDA).

FDA-approved microwaves limit the amount of radiation that can escape from an oven to 5 milliwatts (mW) per square centimeter about 2 inches from the surface of the oven. This limit is far below the level known to harm people.

In short, unless you press your face against the microwave during the entire heating process, the radiation does not harm. This is also the reason why the microwaves stop when the door is opened, stopping instantly there is no risk for who is using the appliance.

Additionally, the same type of exposure occurs when we bake bread or even consume any sun-grown food, according to Juming Tang, a professor of food engineering at Washington State University, told the BBC:

You will not be exposed to the increased risk of cancer

As stated on the website of the AIRC, foundation for cancer research, microwave ovens to heat food use radio frequency radiation, which has a low amount of energy. These are not dangerous as:

"Only high-energy radiations have ionizing power, that is, they are able to modify the subatomic structure of matter and therefore to induce DNA alterations that can increase the risk of cancer"

He may be getting more vitamins and minerals

In some cases, microwaved foods may even store vitamins and minerals better than other types of cooking. According to Harvard Health, this is possible since microwaves take the least amount of time (and use of water) to cook food.

As they read on their site:

“Because microwave cooking times are shorter, cooking with a microwave does a better job of preserving the vitamin C and other nutrients that break down when heated. (…) The cooking method that retains nutrients best is the one that cooks quickly, heats the food for the shortest possible time and uses as little liquid as possible. The microwave meets these criteria. Using the microwave with a small amount of water essentially steams food from the inside out. This retains more vitamins and minerals than almost any other cooking method and shows that microwaving food can really be healthy. "

Harvard experts point out, however, that vegetables are good for virtually any way they are prepared.

Could take too many "false foods"

On the other hand though, if you're eating unhealthy microwaved dishes - that is, ready-to-eat foods that are calorie-only and have no real nutritional value - then your meal won't deliver those extra vitamins and minerals promised in the previous point.

Typically the microwaved meals found in the frozen foods section are loaded with hidden added sugars, high amounts of sodium, and a host of chemicals and preservatives. Better to choose something else.

He could ingest chemicals

This will depend on the container in which the food is heated. According to a study, when heating plastic containers or wrappers, there is an increased risk of ingesting phthalates and plastic additives.

The best thing to do is to place the food in a ceramic or glass dish or bowl before reheating it in the microwave.

He may be taking in too much salt

Check out the nutritional facts before eating microwaved meals. Most ready-made meals are loaded with sodium, which can serve as a preservative or to give the meal a more pleasant flavor. However, with so many healthier frozen meals to choose from, you don't need to rely on salt-rich alternatives at all.

You may be gaining weight

Again, this is only true if you are eating the wrong cooked or microwaved meals. The advice to focus on healthier alternatives, such as cereal and vegetable dishes, is always valid. Always check the labels and nutrition tables to choose the best alternatives.

What Happens to Your Body When You Eat Cauliflower? ❯