What happens to your body if you stop eating sugar for a month? 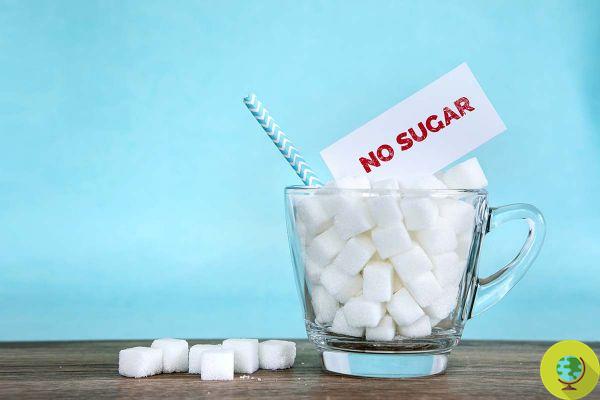 The benefits to the body of stopping sugar for at least a month. The testimonies of nutritionists and experts

The benefits to the body of stopping sugar for at least a month. The testimonies of nutritionists and experts

That, for the sake of our health, we should limit our consumption of sugar is now well known. However, what is often underestimated are the beneficial effects for our body that can be noticed after just one month without sugar.


Consuming too much sugar is an unhealthy habit, now confirmed by many scientific researches. Trying to keep it to a minimum is highly recommended if we want to maintain good health and avoid problems such as obesity, diabetes, tooth decay and more. (Read also: Refined sugar: 10 scientifically proven reasons to limit its consumption)

Worldwide there have been several proposals to try to sensitize the population on the consequences of sugar abuse. In Spain, the “Sugar kills” campaign was launched in recent months, which aims to inform about the harmful effects of this substance.

However, there are also those who have decided not to limit themselves to reducing the consumption of sugar, but to avoid it altogether. An experiment from which a book was also born.

Let's talk about Sarah Wilson, a famous Australian writer and journalist, author of "I Quit Sugar", in which he recounts his "sugar free" experience. In the book he basically retraces the eight weeks during which he gradually reduced the amount of sugar he consumed each day, with obvious benefits.

In an interview he claimed that breakfast was the meal of the day that cost him the most. Like many people, in fact, she too associated the sweet taste with the first meal of the morning. Between coffee, biscuits and more, sugar consumption is often high already in the morning.

The book was very successful and encouraged several people to take the same path. Between them Kerry Torrens, nutritionist and collaborator of the British channel BBC Good Food, who talked about her experience and the results obtained in an article.

The most obvious benefit was the weight loss but the nutritionist also noticed that her digestive system was healthier and that she no longer felt the physical urge to eat sugar.

Similar effects have also been noticed by other people who have tried the same experiment such as Meghna Kriplani, a journalist specializing in wellness and lifestyle. The woman pointed out that eliminating all foods with added sugars was really difficult but it was worth it, given the results.

Meghna managed to reduce his addiction to sugary foods and lost weight: 5 kilos in 40 days. In addition, he has noticed other improvements such as increased energy.

"I didn't wake up tired anymore, I wasn't lazy or lethargic. In fact, I don't think I've ever felt as energetic as I was at that time "

This effect is related to the ability of glucose to inhibit orexin, a neurotransmitter important in the regulation of the sleep-wake rhythm and appetite, as evidenced by a study conducted by the University of Cambridge in 2011.

The feeling of having more energy it was also found by Matt D'Avella, a popular youtuber who wanted to let the public know how his body evolved after 30 days without sugar. His energy levels had stabilized as the blood sugar fluctuations disappeared but Matt also noticed an overall improvement in his body.

A similar experiment had already been done by a Dutch boy who, however, to the limitation of sugar, had also added that of alcohol:

What happens to a sugar and alcohol free body? Sacha Harland's experiment (VIDEO)

One family, on the other hand, even managed to eliminate sugar for a year.

A sugar-free year: the adventure of Eva Schaub and her family

The personal testimonies of those who have eliminated sugar from their diet, at least for a period, can be useful to know the effects that this habit can have on our health.

But this it does not mean that we must completely eliminate the "sugars" from our life. Sugar is found naturally in many foods that we shouldn't stop taking, such as fruit.

The advice, therefore, is to eliminate sugar from packaged foods and choose foods that contain less than 6 grams of sugar per 100 g, except for honey (or maple syrup), jam and minimum 85% dark chocolate, such as The nutritionist Marco Ciambotta also recommends:

The thing that will amaze you about this advice is precisely to notice when you go to the supermarket how many products among those you thought were healthy, instead contain more than 6gr of sugar, starting from cereals, fruit juices, bars and fruit yogurt.

What happens to your gut with all the microplastic you are ingesting? It's worse than expected ... ❯

add a comment of What happens to your body if you stop eating sugar for a month?