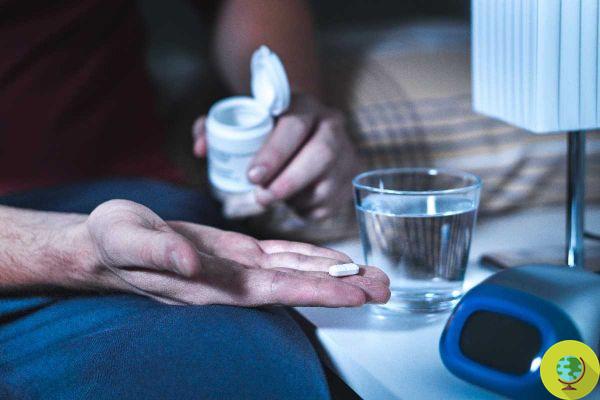 Melatonin is essential for the balance of the sleep-wake rhythm. Here's what happens in the case of daily supplementation

Melatonin is essential for the balance of the sleep-wake rhythm. Here's what happens in the case of daily supplementation


La melatonin is a hormone that helps regulate the sleep-wake cycle, also known as circadian rhythm. Its levels rise at night, when it puts the body into a state of relaxation that promotes good rest. Our bodies produce it naturally, but some people need to take a melatonin supplement to fight ailments such asinsomnia or jet lag symptom. This is what happens to the body if you take melatonin on a daily basis.

La melatonin is a hormone produced by the pineal gland in the brain. It is mainly responsible for the regulation of the circadian rhythm which allows you to manage the natural sleep cycle; for this reason, it is often used as a sleep aid and to combat problems such as insomnia.

In addition to improving sleep, melatonin is also involved in the management of immune function, blood pressure and cortisol levels. It acts as an antioxidant, and many studies show that it can improve eye health, reduce symptoms of seasonal depression, and even provide relief from acid reflux.

So what happens to you and your body if you take melatonin every day?

It can help you rest better

The hiring of a melatonin supplement can help you fall asleep faster, particularly if you have a circadian rhythm disorder, such as the delayed sleep-wake phase that develops when you go to bed regularly late at night and sleep late into the morning.

Several studies have shown that melatonin can support better sleep; one study out of 50 people with insomnia showed that taking melatonin two hours before bed helped people fall asleep faster and improved overall sleep quality. Another wide one analysis on children and adults with sleep disorders found that the melatonin supplement reduced the amount of time it took to fall asleep, increased total sleep time and improved rest quality. (Read also: 8 Reasons Sleeping On Your Back Can Solve Your Sleep Problems)

It can cause vivid dreams or nightmares

Some people report having unusually vivid or disturbing dreams when they take a melatonin supplement. This is because melatonin can increase the time spent in REM sleep, the sleep cycle that causes vivid dreams. During sleep, melatonin releases vasotocin, a protein that regulates the REM. So taking a supplement can increase vasotocin and, consequently, increase vivid dreams although it is currently unclear whether thetaking higher doses causes more dreams or nightmares.

It might make you feel groggy the next day

Like many sleep aids, the melatonin could make you feel sleepy or sluggish the next day. You can limit this effect by taking the lowest effective doses to help you sleep well. Some supplements contain up to 10 mg of melatonin, this dose is enough for a good rest, while higher doses may make you feel groggy.

It can give your metabolism a boost

Poor sleep is linked to increased appetite and weight gain. Getting more sleep, taking a melatonin supplement might help. There search investigated how the melatonin affects calorie intake and hormones that regulate hunger and the sense of satiety, and it has been found that it could aid metabolism and be a potential therapeutic agent against endocrine-metabolic disorders.

It can help with jet lag and related symptoms

- studies found that taking 2 to 3 milligrams of melatonin a day when traveling in a different time zone appears to improve the symptoms of jet lag, such as daytime sleepiness and fatigue. To relieve jet lag, experts recommend taking melatonin two hours before bed, starting a few days before travel.

Melatonin is rich in antioxidants, which can help prevent cell damage and keep eyes healthy. In fact, the search suggests it could be useful in treating conditions such as glaucoma and age-related macular degeneration. In one study in 100 people, supplementing with 3 mg of melatonin for 6-24 months helped protect the retina, delay age-related damage and preserve visual clarity. However, research is limited and more human studies are needed to determine the long-term effects of melatonin supplements on eye health.

It can help treat gastroesophageal reflux

La gastroesophageal reflux disease (GERD) it is a condition caused by the reflux of stomach acid into the esophagus, which causes symptoms such as burning, nausea and belching. Melatonin has been shown to block the secretion of stomach acids and also reduce the production of nitric oxide, a compound that relaxes the lower esophageal sphincter, allowing stomach acid to enter the esophagus. For this reason, some research suggests that the melatonin can be used to treat heartburn and GERD.

Uno study out of 36 people showed that taking melatonin alone or with omeprazole was effective in relieving heartburn and discomfort caused by this disorder. Another study compared the effects of omeprazole and a food supplement containing melatonin along with several amino acids, vitamins and plant compounds in 351 people with GERD. After 40 days of treatment, 100% of people taking the melatonin-containing supplement reported a reduction in symptoms compared to only 65,7% of the omeprazole group.

It could reduce the symptoms of seasonal depression

Seasonal Affective Disorder, also called seasonal depression, it is a common condition that is estimated to affect up to 10% of the world population. This type of depression is related to the changing seasons, and occurs around the same time each year, with symptoms typically appearing between late fall and early winter. Someone research indicate that it could be linked to changes in the circadian rhythm, caused by changes in light.

THEhuman growth hormone (HGH) is a type of hormone vital for cell growth and regeneration. Higher levels of this important hormone have also been linked to increases in both strength and mass muscular.

Some studies have found that supplementing with melatonin can increase HGH levels in men; for example, a small study out of eight men he found that both low (0,5 mg) and high (5 mg) doses of melatonin would be effective in increasing HGH levels. Another study on 32 men it showed similar results; however, large-scale research is needed to understand how melatonin can affect the levels of this hormone in the population.