What happens an hour after eating a Big Mac?

We have talked to you several times about the negative effects of junk food on our body, starting with the unwanted effects of consuming fizzy drinks and products too rich in refined sugar. But have you ever wondered what happens in our body after eating a Bic Mac?

We have talked to you several times about the negative consequences of consuming junk food for our body, starting with the undesirable effects of consumption of carbonated soft drinks, Energy Drinks and products too rich in refined sugar. But have you ever wondered what happens to our body after eating a Bic Mac?

Perhaps after consuming one of the sandwiches of the well-known fast food you thought you felt quite full, but shortly after your meal, the sense of hunger reappears. Here you are what happens an hour after eating a Big Mac according toInfographic made by Fast Food Menu Price.

In the first 10 minutes

During the first ten minutes i blood glucose levels begin to increase abnormally. Our brains evolved over a long period of time when food was scarce. Thus we became adept at choosing high-calorie foods. A normal Big Mac contains around 540 calories and helps to raise blood sugar levels in a short time. Junk food triggers a reward system in our brains by releasing chemicals that give a feeling of well-being, such as dopamine. The same process also works similarly for drugs like cocaine and contributes to the likelihood of finding yourself eating compulsively.

A Big Mac contains high levels of glucose-fructose syrup (High fructose corn syrup HFCS) e di sodium. Both ingredients are addictive and cause the body to crave more and more. These ingredients can also lead to obesity, diabetes and heart disease.

A Big Mac contains a whopping 970 milligrams of sodium, according to the Fast Food Menu Price infographic. This large amount of sodium can stimulate the dehydration. This is a vicious circle that can lead us to think we want to eat again, because we risk mistaking the thirst due to dehydration for hunger. Excessive sodium intake can also strain the heart and kidneys and lead to hypertension.

After 40 minutes, the feeling of hunger. The body has lost control of blood sugar levels and is asking for food again. When consuming a food that is high in calories and refined sugars, the insulin response can bring down glucose levels and lead us to want to eat more. 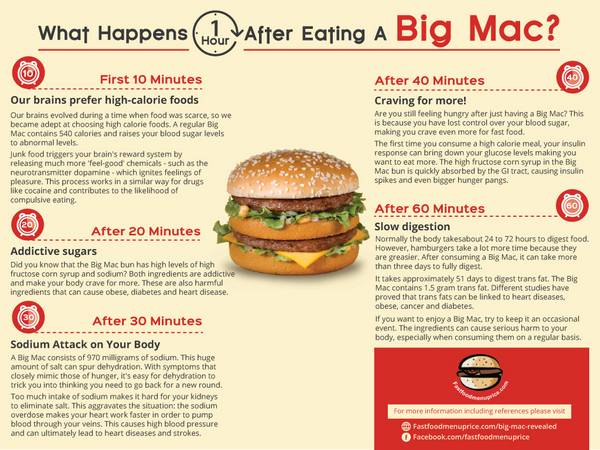 After an hour you will realize that your digestion is very slow. A sandwich like the Big Mac is high in fat and can take many hours to digest. The infographic points out that a Big Mac contains 1,5 grams of trans fats, which can be related to heart disease, obesity, cancer and diabetes. The ingredients of a Big Mac are likely to cause serious damage to the body, especially if this sandwich is eaten regularly.

In conclusion, after analyzing the Big Mac and its ingredients, the authors of the infographic suggest to consume this sandwich with a lot of moderation. They review its components and point out its high calorie and fat content. They do not want to create alarmism but to lead consumers towards one increased awareness with respect to what they choose to eat.

What do you think? Would you still eat a fast food sandwich in light of this information?

Coca Cola, here's what happens to our body: 6 effects in 60 minutes
Energy Drink: what happens to the body 24 hours after taking it?
Coca Cola at Expo 2015: the truth about the multinationals that feed the planet with fats and sugars

What do you see first? The answer reveals the hidden side of your character ❯

add a comment of What happens an hour after eating a Big Mac?