What are gluten-free cereals? The advantages of their use in nutrition

Cereals are very important, they represent our main source of carbohydrates, let's see together the characteristics of those without gluten.

Cereals are very important for our diet as they represent the main source of carbohydrates.
Gluten-free cereals can be consumed without health risks by people suffering from celiac disease but should be included in everyone's diet, to ensure a varied diet that provides the body with all the nutrients it needs.


Gluten-free cereals: what they are and what advantages they have for nutrition

Celiac disease sufferers must include these cereals in their daily diet. People intolerant to gluten can also consume oats, as long as they are certified gluten-free.

Obviously gluten-free cereals are not only intended for celiac people, but can be consumed by everyone. The most important rule behind a healthy diet is in fact to vary the food often, and this also applies to cereals.

Cereals are very important from a nutritional point of view and should be consumed every day, because they represent the main source of carbohydrates in our diet, substances that should cover about 55% of our daily energy needs.
In addition to carbohydrates, cereals provide good amounts of fiber, very important for intestinal well-being, and essential micronutrients for our health, such as vitamins and minerals.

For culture and tradition in our country they consume a lot wheat and rice, but little space is given to minor cereals. This causes our diet to be often monotonous, while nature offers us a great variety of products to draw from to meet nutritional needs and taste.

Millet, buckwheat, quinoa and other gluten-free cereals should therefore become part of our diet to ensure variety of nutrients and flavors.

Rice (Oryza sativa) is one of the most important cereals for human nutrition and is the staple food for about one billion people in the world.
Rice grains are rich in complex carbohydrates and fiber, have a low fat content and have proteins with a good biological value. Rice also contains B vitamins and mineral salts, including potassium and magnesium.
It should be borne in mind that the processing of brown rice to refined involves an impoverishment of the nutritional components and a partial loss of fibers, vitamins and proteins and an enrichment of starch. To overcome this problem, the parbolization process is used: parboiled rice preserves the nutritional value of brown rice.

Among the carbohydrates present in rice, starch stands out, which in the grains of this cereal is composed of 80% of small granules that make this cereal particularly digestible.
The high digestibility of rice, combined with hypoallergenicity and nutritional characteristics make this cereal suitable for everyone's diet, especially children, the elderly and the debilitated.

Maize (Zea mais) is the third most cultivated cereal in the world, after wheat and rice. In human food it is hardly consumed in the form of grains: corn flour is more widespread, from which polenta is obtained. In addition to providing complex carbohydrates and fiber, corn has a good content of vitamin E and B vitamins including biotin (vitamin B8), riboflavin (vitamin B2) and thiamine (vitamin B1). Yellow corn is also a good source of provitamin A. 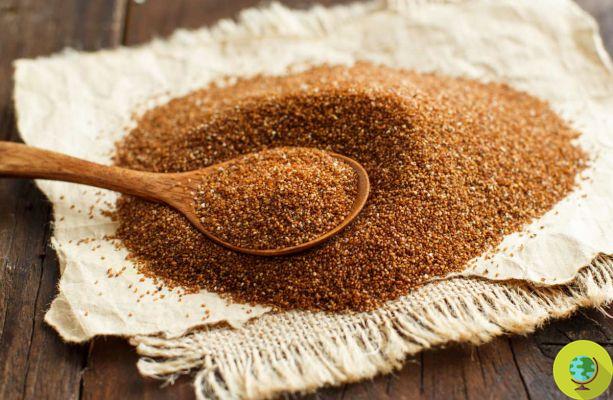 Teff is a cereal originating from some areas of Africa and still little known and used in our country. It is perhaps the smallest cereal in the world and yet its grains have excellent nutritional characteristics, as they are rich in high biological value proteins.
It also contains low glycemic index carbohydrates and high amounts of fiber, as well as mineral salts, among which calcium stands out.

The consumption of teff is therefore particularly suitable for diabetics, for those who are intolerant to gluten and for those who may run into calcium deficiencies, including vegans and postmenopausal women.

In the past, millet (Panicum miliaceum) was mainly used for feeding farm animals, but recently the use of this cereal for human nutrition has been re-evaluated mainly because the shelled grains of millet do not contain gluten, therefore the their consumption is indicated in those suffering from celiac disease.

Introducing millet into the diet is useful for everyone since the grains of this minor cereal are rich in complex carbohydrates that are easily digested even by children, the elderly, pregnant women and in all situations in which digestion is slowed down or difficult.

In the past, oats have played a very important role in human nutrition which has been gradually lost to make room for other cereals. The interest in the nutritional properties of oats has recently been rediscovered as this cereal has proved useful in the prevention of metabolic diseases, by controlling blood cholesterol levels.

Today oats are marketed in the form of flakes and flour used to make biscuits, diet products and to prepare porridge, a typical dish of Anglo-Saxon cuisine. In addition to containing carbohydrates and fiber, compared to other cereals, Avena sativa has a higher content of proteins (12,6-14,9%), lipids and iron. 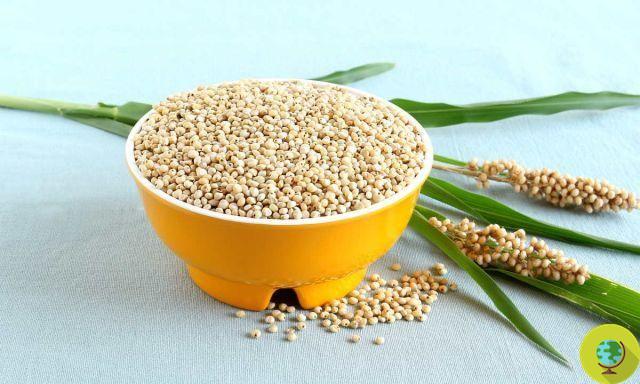 Sorghum (Sorghum vulgare) is a minor cereal not very common for human consumption but particularly interesting from a nutritional point of view for the high quantity of fiber capable of increasing the sense of satiety, regulating the absorption of nutrients and improving transit intestinal.

Thanks to its characteristics, sorghum is not only useful for celiacs but also for people with intestinal problems such as constipation and poor digestion.

Buckwheat (Fagopyrum esculentum) is a pseudo-cereal used mainly in the form of flour, with which the famous Valtellina pizzoccheri and yaki soba, spaghetti of Japanese cuisine are prepared. Buckwheat flour is also used in the preparation of cakes and to enrich bread dough.

Quinoa (Chenopodium quinoa) is a pseudo-cereal that is generally eaten in grains. The small quinoa seeds are particularly appreciated for their high content of high biological value proteins as well as for the absence of gluten, characteristics that make them particularly suitable for the diet of celiac people and for those who follow a vegetarian or vegan diet.
Quinoa also contains good amounts of mineral salts, B vitamins and vitamin E. 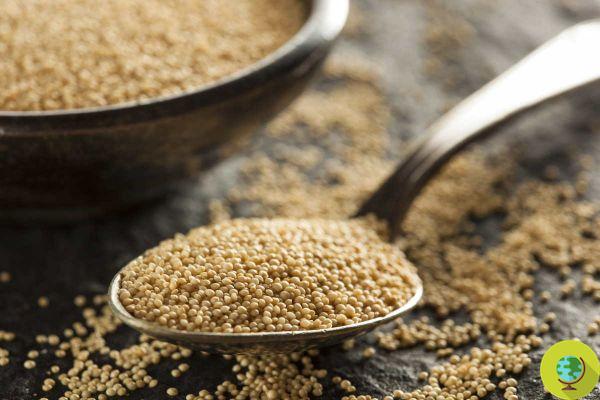 Even amaranth, like buckwheat and quinoa, is not part of the cereal family but is considered like cereals for its nutritional properties and for the way it is consumed.

In fact, amaranth contains high amounts of carbohydrates but, unlike the seeds of Graminaceae, it contains much more proteins and is naturally gluten-free.

A monotonous diet can be boring and especially lead to more often food shortages especially with regard to vitamins and minerals.
Introducing other grains into the diet is of great help in providing the body with all the nutrients it needs.

In collaboration with Schär

Which vitamins and nutrients should you take more often if you are already 40 to avoid deficiencies? ❯

add a comment of What are gluten-free cereals? The advantages of their use in nutrition