Wet market: for the WHO, wet markets should not be closed, despite their role in the pandemic 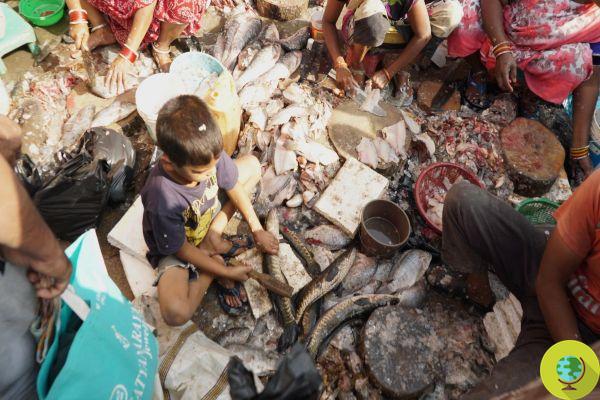 The coronavirus pandemic started from the Wuhan wet market, where wild animals were sold. The WHO has expressed itself not recommending its closure

As is now known, it is from the wet market of Wuhan in China that the new coronavirus started, many have since asked for the definitive closure of these places where wild animals are also sold. The WHO intervened on the subject, arguing, however, that this kind of markets should not be closed and that further research is needed to better identify their real responsibilities with respect to the pandemic in progress.


The wet market in the Chinese city of Wuhan has been the source or perhaps "amplification scenario" of the coronavirus. This was stated at the press conference Peter Ben Embarek, WHO expert on food safety but also on viruses that cross the species barrier from animals to humans:

“The market played a role in the event, that's clear. But what role we don't know, whether it's the source or the amplification or just a coincidence that some cases have been detected in and around that market. (...) It is not clear whether live animals or infected sellers or buyers could have introduced the virus into the market "

Chinese authorities closed the Wuhan wet market in January as part of efforts to stop the spread of the virus, and then a temporary ban on the trade and consumption of wildlife was ordered upon reopening.

Wet markets reopen in Wuhan, but (apparently) without wild animals

The wet markets, widespread not only in China, traditionally sell fresh products and live animals, such as fish but also rare wild species, and they do so in the open air in often very precarious hygienic conditions.

Coronavirus: What are the 'wet markets' that are causing the devastating viruses to develop in China

Undercover images show the wet markets of Indonesia and Thailand still open, despite everything ...

Many of these markets around the world that selling live animals need to be better regulated and hygiene conditions improved, and only a few should be closed, argues Ben Embarek, but the vast majority can be fixed and organized better.

It often involves controlling waste management, the movement of people and goods, and separating live animals from animal products and fresh produce, he said.

The WHO expert recalled that such markets are key to providing food and livelihoods to millions of people around the world and that authorities should focus on improving them rather than banning them.

Obviously his words caused quite a stir. The news that the WHO defends questionable places such as the so-called "wet markets" immediately went around the world and there was no lack of requests for clarification.

Teresa Telecky, head of the wildlife department of Humane Society International called on WHO to clarify Dr. Embarek's observations and "reiterate that wild animals should not be sold in these markets".

"The wildlife trade caused the Covid-19 pandemic and the WHO has an obligation to advise countries to reduce the risk of another pandemic by outlawing live wildlife markets."

We recall, however, that in China since January the trade in wild animals for food has been prohibited throughout the territory.

add a comment of Wet market: for the WHO, wet markets should not be closed, despite their role in the pandemic