Watermelon was originally white and tart. What made it the favorite fruit of the summer? 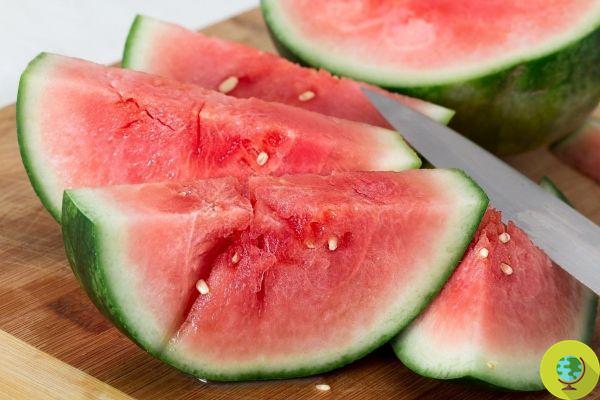 Scientists are wondering about the origin of watermelon, the fruit of summer that was not originally supposed to be so sweet and colorful

In addition to being very good for health (rich in water and vitamins), it is the undisputed symbol of summer, with its unmistakable sugary taste and its orange-red color. But now scientists say that, originally, watermelon was not so sweet and so brightly colored. What then is the origin of this fruit?


Contrary to what has been believed so far, the watermelon (Citrullus lanatus) is not native to the so-called Fertile Crescent, a historical region of the Middle East corresponding to ancient Mesopotamia. This is what emerges from a study conducted by botanists at the Ludwig Maximilian University of Munich (Germany), who observed the genetic sequence of seven species of watermelon.

We found that the modern watermelon genome we routinely consume is more closely related to that of the Sudanese wild watermelon than other types we have analyzed - explains botany Suzanne Renner, author of the research. - The Sudanese wild watermelon, however, has some important differences with the 'domestic' version, such as the white and not very sweet pulp. This is why it is generally used as animal feed.

Despite these differences between the two species, researchers are inclined to think that the Sudanese fruit is probably a precursor to the red and sweet watermelon we consume on our tables. It is possible that ancient farmers began to cultivate a non-bitter version of the wild watermelon and, consequently, gradually increased its sweetness through the generations, by means of a process of 'domestication'. Even the typical red color is probably due to the artificial selection, as the farmers favored and allowed the growth of only red pulp fruits. When this process actually took place and how much the hand of man is responsible for it, is still to be clarified.

(Read also: Watermelon: calories, properties, benefits and how to best enjoy it)

We know the Egyptian pharaoh Tutankhamon was buried together with watermelon seeds more than 3.300 years ago - but this is not enough evidence to date the 'domestic' watermelon: the seeds may also have belonged to a wild watermelon. Even more ancient (4.300 years ago) is an image of a fruit that appears to be a watermelon represented on an Egyptian tomb; in another nearby tomb, of a similar period, the image of watermelon is placed side by side with that of other sweet fruits, such as grapes, and this would be proof for botanists that the process of 'domestication' of the watermelon had already took place. According to the researchers, it may have been the ancient Nubians (a population that inhabited the region of modern Sudan) who 'domesticated' the fruit and shared it through trade with the Egyptians.

Speaking from the historical point of view, it is a sensational discovery - comments the professor They have Schäfer, who took part in the study. - It is becoming increasingly clear that the origin of this fruit is the North African region, an area that we have always underestimated, focusing so far on the Fertile Crescent where we thought watermelon seeds originated. More research on North African agriculture is now needed to support this theory with archaeological evidence.

In which part of the brain are autobiographical memories stored? In the hippocampus only "the index" ❯

add a comment of Watermelon was originally white and tart. What made it the favorite fruit of the summer?