Watch out for the salt in veggie burgers and packaged veggie charcuterie! 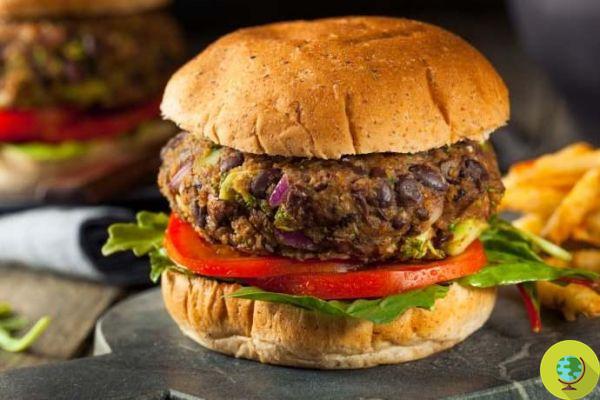 Many meat alternatives such as ground beef or veggie bacon have record salt levels.

More than a quarter of meatless burgers, sausages, and mincemies, tested in one study, exceed the recommended maximum salt levels


Many meat alternatives such as ground beef or veggie bacon have record levels of salinity, so much so that they are also a health hazard.

This is what emerges from a report conducted by Action on Salt activists on some products found in UK supermarkets, which found that over a quarter (28%) of the 157 vegetarian and vegan meat substitutes analyzed were more salty than their maximum salt targets.

In short, what are commonly seen as "healthier" options for excessive consumption of processed meat are also likely to end up risky to health.

According to the survey, the average veggie burger contains more salt, coming in at 0,89 g, compared to a meat one that contains 0,75 g. Also, some vegetarian sausages have as much salt as pork sausages.
In particular, Tofurky's Deli Slices Hickory Smoked and Tesco's Meat Free 8 Rashers Bacon Style products contained much more salt than seawater (respectively 3,5 and 3,2 grams per 100).

Of the 157 alternative supermarket meat products analyzed, the highest average salt content per 100 grams was found in the meat-free bacon substitutes (2,03 g / 100 g) and in sliced ​​meat substitutes (1,56 g / 100 g). Analyzing the portions, the vegetarian "Kiev" products were the saltiest (1,03 g), even more than a large portion of McDonald's fries. This was followed by meatless sausages (0,96g) and meatless fillets (0,87g), which were tastier than three servings of salted peanuts.

According to the guidelines of the World Health Organization, adults should not consume more than 5 grams of salt per day. Remember everyone, vegetarians and non-vegetarians, that salt is present in any packaged food and always read the labels.

Watch out for cosmetics in pregnancy: parabens enter the placenta (and promote obesity in children) ❯

add a comment of Watch out for the salt in veggie burgers and packaged veggie charcuterie!