Watch out for the barbecue, it's carcinogenic! I'll explain how to grill without risking your health 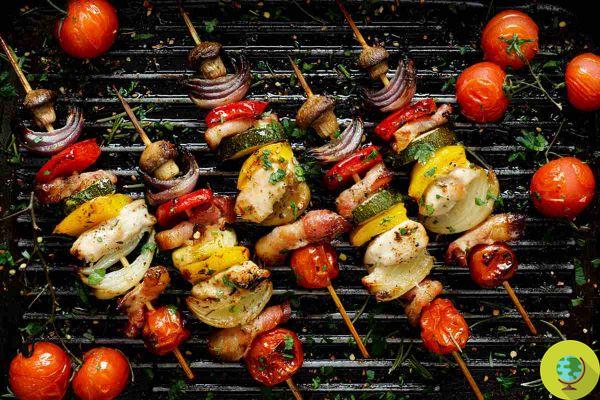 It has now been confirmed several times: making a barbecue by cooking especially red meat exposes you to a greater risk of cancer (in particular to the colon). Here are some tips for grilling without risking health.

It has now been confirmed several times: to barbecue cooking mainly red meat exposes you to a greater risk of cancer (especially of the colon). Here then some tricks for grilling without risking health.


Summer is the time when, with family and friends, you spend more time outdoors and often have lunch or dinner preparing a nice barbecue together. However, especially those who eat red meat risk health consequences.

Cooking meat, in fact, can cause the formation of substances which, having reached our organism, can be carcinogenic. To remember this time is the American Institute for Cancer Research.

"Several researches have shown that a diet rich in red and processed meat increases the risk of colon cancer and grilling both white and red meat at high temperatures forms highly carcinogenic substances."

High-temperature cooking, such as grilling, causes the formation of compounds called heterocyclic amines (HCAs) and polycyclic aromatic hydrocarbons (PAHs). These substances have shown the ability to damage our DNA so as to promote the onset of cancer.

What to do then? Should we give up on the grill altogether?

From the US experts come the tips to avoid cooking incorrectly, exposing themselves more to the carcinogenicity of the barbecue:

Watch out for raw flour: this is why the doughs of bread, cakes and biscuits should not be tasted ❯

add a comment of Watch out for the barbecue, it's carcinogenic! I'll explain how to grill without risking your health