Watch out for limes in your mojito, most have inedible peel and full of pesticides 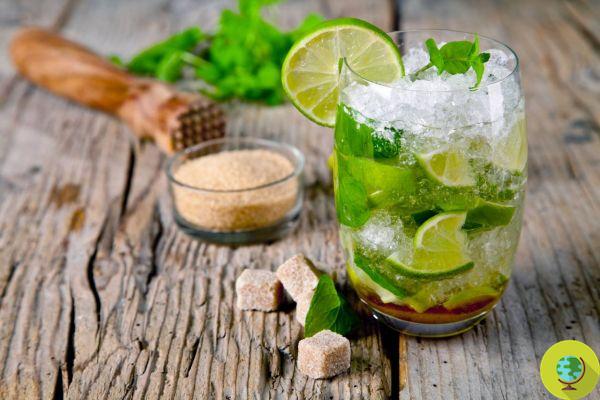 Limes are often full of pesticides and, despite this, they end up in our mojitos. Difficult to find them untreated. We pay attention

Summer has now arrived, the heat too and perhaps many of you are already starting to imagine the moment when they will sip a nice mojito, perhaps directly on the beach. This much-loved cocktail, however, hides a little secret. The lime with which it is made most often has the peel inedible and full of pesticides.


Citrus fruits are often used to make cocktails and most often inserted into wedges with all the peel inside or as a decoration. A habit that we don't even notice anymore is so much inherent in our culture but that actually exposes us to some risks. The peels, in fact, could be treated with pesticides and therefore it would not be the case to consume them or make them come into contact with what we drink or eat.

A case above all is that of lime, an exotic fruit used in mojito that comes from far away and that often before arriving in our supermarkets has been sprayed with a series of substances, starting from the cultivation phase. This concretely means that on its peel there are traces of pesticides, obviously allowed in the countries from which it comes but which make its peel inedible, as can be read clearly on most of the packages.

This is practically certain for limes from Spain, Chile, Peru, Mexico and South Africa. Finding limes with edible peel, therefore, is not easy and consequently the doubt arises: are these fruits used instead by bars and clubs in the creation of cocktails? It is not known, unless we ask for specific information about the manager which should show us the lime box or the package label where, by law, it must be stated whether the peel is edible or not.

In practice, we risk consuming our mojito unaware of ingesting a series of pesticides. Among other things, there is also a problem related to the price, the lime is in fact a very expensive exotic fruit and, if it is free of pesticides or organically grown, it is even more so. It is therefore unlikely that whoever prepares our cocktail has opted for an untreated product.

It is not only a problem of lime, in fact, the peel of citrus fruits can be inedible even in the case of oranges and lemons. To be sure of being able to consume the peels it is always good read the label where it is specified whether they are edible or not. We had already told you about the presence in supermarkets of huge and shiny lemons which in fact, going well to read, it turns out that they have an inedible peel. (Read also: Shiny and perfect supermarket lemons, don't trust! The peel is not edible).

What to do? If we don't want to risk it, we can also prepare an excellent mojito at home, choosing for example lime from Sicily or Calabria (well, limes are also grown in our country!) With edible and untreated peel.

Ode to silence! Because you need it to heal body, mind and spirit ❯

add a comment of Watch out for limes in your mojito, most have inedible peel and full of pesticides