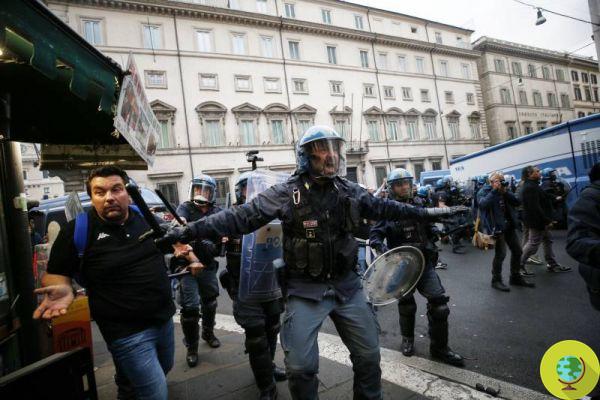 Whoever believes that another landfill is needed gives the Camorra the win. This - in essence - the message launched by the mayor of Boscoreale, a municipality in the Neapolitan area, in commenting on the difficult situation of Terzigno, the Campania town that has been in chaos for days due to anti-landfill protests and the numerous clashes, which took place day and night. , between demonstrators and policemen.

Anyone who believes that aanother landfill is won by the Camorra. This - in essence - the message launched by the mayor of Boscoreale, a town in the Neapolitan area, in commenting on the difficult situation of Terzigno, the Campania town that has been in chaos for days due to anti-landfill protests and the numerous clashes, which took place day and night, between demonstrators and policemen.

The tensions exploded definitively after the spread of the news on the president of Campania, who decided to open one new landfill in the Vesuvius National Park (which would become the largest in Europe); since then there have been blockades against trucks carrying waste, clashes with police cars, hand-to-hand fights between demonstrators and police forces. A situation that led to five arrests and twenty injuries.

But the blockades continue - because the inhabitants of Terzigno and its surroundings are not willing to keep quiet and succumb - and so they continued to garrison the place designated for the landfill even at night, giving rise to further tensions and clashes.
To face the emergency and what it is became a real urban guerrilla, today there will be a Extraordinary Council of Ministers, who will try to stop a situation that shows no sign of abating.

For a few days the streets of Terzigno have become the scenery of more and more clashes between protesters and policemen, which turned peaceful demonstrations into clashes from urban warfare, both day and night.
Two nights ago, more than 200 men - including policemen and carabinieri - in riot gear were called to force the demonstrators to leave the roundabout area of ​​Via Panoramica, which leads directly to the town's landfill. students, workers and mothers chased those who were trying to escape with their vans, escaping the chaos. The tricolor was also burned yesterday.

Meanwhile Domenico Auricchio, mayor of Terzigno, met Silvio Berlusconi to make him aware of the ongoing drama and his disappointment at the opening of a new landfill. “If a solution is not found, from tomorrow morning I will be on the street together with my fellow citizens protesting. - Auricchio said - Berlusconi already received us 20 days ago, on his birthday. He had guaranteed us that he would come to Terzigno, but then he didn't come. We contest the decision that was taken on Wednesday at the summit table of the Campania PDL in which it was established that the opening of the second landfill will continue: we want to know what happened and why the Campania administrators had said something before and now they say about it another one".
And the situation becomes even more serious if we consider that Auricchio is an exponent of the PDL.

The position of is different and more moderate Legambiente that says no to rubbish dump, but also stigmatizes the violence of these days: “The violence on both sides is deplorable and the use of force a serious mistake as well as the opening of a second landfill in Terzigno, in the Vesuvius National Park. The inhabitants of that territory have the right to explanations and above all to clarity, so opening a dialogue is a must. It is necessary to guarantee a serious, efficient and effective control on the trucks arriving at the Sari landfill until its complete exhaustion is reached ”.

Thus in a note they express their positions Vittorio Cogliati Dezza and Michele Buonomo, respectively national and regional president of Legambiente comment on the incidents in Terzigno launching an appeal to stop the violence.

"If it is true that other landfills need to be found to cope with the current emergency, - the two representatives of Legambiente continue - it is equally true that you risk see a movie you've already seen. For the umpteenth time we go back to reiterate that without structural interventions, the current one risks being, again, the penultimate waste emergency in Campania. Citizens cannot continue to bear the "eco-bales" of the Government, which passed off as a definitive solution the opening of mega landfills, now in the process of being exhausted, and the inauguration of the Acerra incineration plant which after a year and a half continues to work little and badly. It is necessary that, once and for all, - add Cogliati Dezza and Buonomo of Legambiente- complete the plant system by giving absolute priority to organic waste treatment, extend home separate collection to the whole of Campania, as has happened in many municipalities, such as Salerno and Avellino, and apply serious waste reduction policies. The virtuous citizens and administrators who in recent years have courageously managed to reach considerable figures for separate waste collection - conclude the managers of Legambiente - are fed up with proclamations, inaugurations and dance of figures. They ask for concreteness and facts that can be achieved in a short time, without wasting public money as has happened in the past and without resorting to bankruptcy solutions such as the commissioners ”. We will see what comes out of today's meeting.

Read all our articles on the waste emergency in Terzigno

Waste: Sweden recycles too much and imports garbage from Denmark ❯

add a comment of Waste, today extraordinary Cdm. Clashes between demonstrators and police continue in Terzigno