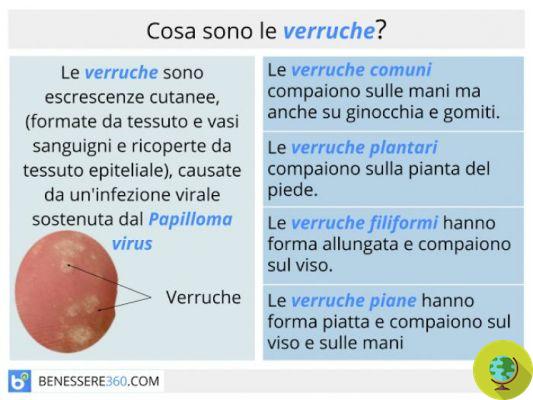 What are warts? Warts are benign skin formations. They consist of a core of internal, vascularized tissue and layers of epithelial tissue. The appearance of warts occurs after a superficial contagion. The virus remains confined to the skin and is not present in the blood.

WHAT IS THE warts? Warts are usually benign skin formations of viral origin. They are composed of a core of internal, vascularized tissue and layers of epithelial tissue.

La appearance of warts occurs after a superficial contagion. The virus remains confined to the skin and is not present in the blood.

Si believes that la cause main of the appearance of warts is the human papilloma virus, noto come virus HPV. We sometimes speak of juvenile warts when they appear in young people and children, particularly in the area of ​​the hands and face. The different types of warts are in any case due to viruses and they are contagious. The infection usually occurs in very popular places such as showers, gyms and swimming pools, where the hot and humid climate favors the survival of the virus in an active form.

Warts they can develop in any area of ​​the body. But they often occur in some specific places, such as the hands, feet, elbows, and knees. They can present micro-lesions in which the virus can nest, caused by frequent contact with the external environment.

Common warts: common warts have the same color of the skin or tend to a reddish color, have a rough and wrinkled surface, a characteristic by which they can be recognized.

Plantar warts: appear only on the sole of the foot and inside, may present dark dots, which help distinguish them from calluses. They are usually softer than common warts.

Vulgar warts: vulgar warts are also called leeks. They have a yellowish-gray color and an irregular surface, due to the presence of so many reliefs. They are benign formations for which the same treatments are followed as for other types of warts (see "Health without medicines - Healing with natural medicines" - Librex).

As for warts, it works with different methods. L'total surgical excision of the skin area where the wart is present can leave scars. In addition, the wart could reappear, which is why this method is used less and less.

La Cryotherapy instead it consists in freezing the affected area by means of liquid nitrogen applied locally. The cells detach naturally and the epidermis then regenerates itself. We also use the laser, a method that consists in burning the wart. Are there any natural remedies for warts? Here are a few.

This remedy consists of cutting one thin slice of fresh potato pulp e applying it and rubbing it on the wart once or twice a day, for 5-10 minutes, for 7-10 days. The remedy promises to make the wart regress and then disappear. There's no harm in trying.

Il fig latex extracted from the leaves, fruits or twigs of this plant is considered a natural remedy against warts. It is applied on the warts and left to dry and then cover the part with a plaster to protect it from the sensitizing action of fig latex. Natural medicine suggests repeating the application every day until the wart disappears. Other plants considered useful, in addition to the fig, as regards the latex to be applied are the celandine, the parietaria and the fussy grass.

Oily preparations based on Vitamin E would be able to lead to wart death if used topically. These preparations are also used as an anti-skin irritation cream.

The practice ofacupuncture it could be useful for promoting the disappearance of warts. Acupuncture in these cases should be applied both to promote general rebalancing and more specifically to stimulate points that can help solve the problem.

According to the French pharmacist Daniele Festy, the virus that causes warts disappears as it arrived. He argues that it is useless to undergo painful treatments such as surgical removal of warts or liquid nitrogen and specifies that the disappearance of warts can be accelerated thanks to essential oils. He suggests asking the pharmacy to prepare a mix of essential oils to be applied every day on warts in the amount of one drop, especially after a bath. Repeat twice a day for 2-3 weeks until the wart disappears. The mix consists of the following essential oils (1 ml each, for a total of 5 ml): complete oregano, juniper, cassia, cloves, mountain savory. (see "My Bible of essential oils" by Denièle Festy - Sonda).

Read also:
Your natural pharmacy: remedies and what you need for small daily problems From the Euphorbia plant a natural remedy to fight skin cancers
Stuffed vegetables: recipes with 10 different vegetables ❯

add a comment of Warts: types, causes and natural remedies