With vitiligo, white patches develop, non-pigmented areas where melanin is completely lacking. But what is Vitiligo due to? And how is it treated?

La vitiligothe leucodermia, is one of the most frequent manifestations of "hypopigmentation"Cutaneous. In the presence of vitiligo, that is, on the skin, but also on the hair or mucous membranes, they develop white patches, of non-pigmented areas where melanin is completely lacking. But what is Vitiligo due to? And how is it treated?


Vitiligo has no pathological repercussions, but unfortunately often those who suffer from it experience it as a real disease, which, although not contagious, leads them to isolate themselves from everyone and live a strong emotional stress.

About 1% of the world's population is affected by vitiligo, regardless of gender or belonging to a particular ethnic group (Source Inran).

What is vitiligo and types

Vitiligo can be defined as a "dermatological disorder”Due to which white spots are formed on the skin due to inactivity of melanocytes, the cells responsible for the production of melanin.

It is a non-contagious and non-infectious skin disease, for which the melanocytes undergo an alteration and are no longer able to carry out their main task: for this reason, asymmetrical white spots are formed on the skin of a subject suffering from vitiligo characterized by a normally hyperpigmented outline, but sometimes also hypopigmented (trichoromic vitiligo). The spots can spread all over the body or remain limited in some areas, they can affect areas near openings (such as the eyes, anus or genitals), but also the nails, hands, face and neck.

These spots caused by vitiligo are called "hypocromial" or "acromiche", Precisely because they are devoid or excessively deficient in melanin.

Typically, vitiligo is classified into three main types based on the distribution of white spots on the skin:

bilateral vitiligo: Is the main form (includes about 90% of all types of Vitiligo) and is characterized by symmetrical white spots on the right and left side of the body. Based on the number of spots, the parts of the body in which they appear and their size, bilateral vitiligo is then divided into:

segmental vitiligo: includes about 10% of all types of vitiligo and is characterized by the presence of spots only on half of the body (or only on the right or only on the left) that seem to follow a certain "path" arrangement

perinevic vitiligo: often visible in patients with bilateral vitiligo, it is characterized by the presence of spots that start centrifugally from a mole forming a white patch around the mole itself. If the moles are isolated in certain areas of the body, they take the name of "Sutton's halo nevus", named after the scientist who first studied them. 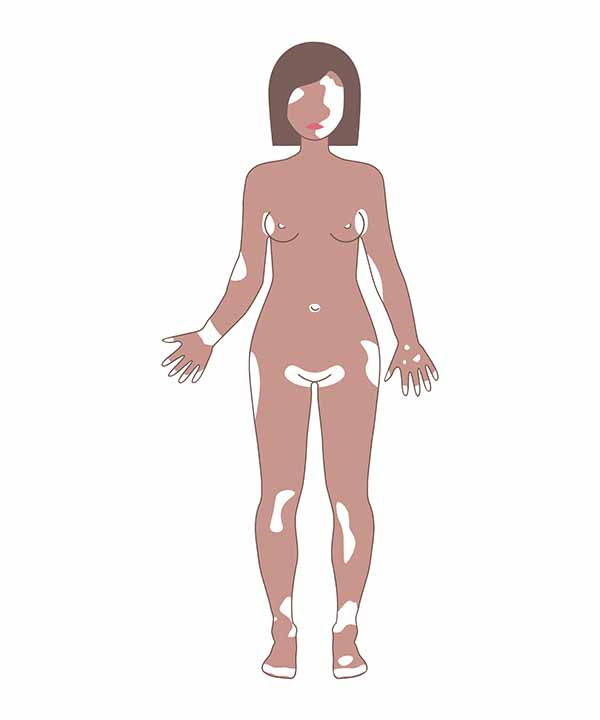 Researchers still have a lot to discover on the causes of vitiligo, but it is highly accredited thesis that the depigmentation derives from an autoimmune disorder: the cells that produce skin pigments, that is, would be destroyed by mistake of one's own immune system.

Because of this, it would happen that the cells of the immune system go to attack melanocytes, whose functions would thus be altered e making melanin production impossible. In these areas, therefore, the skin remains white. As with almost all autoimmune diseases, even in the case of vitiligo inheritance seems to play a considerable role.

In addition to genetic predisposition, the following would also have been recorded as triggers: 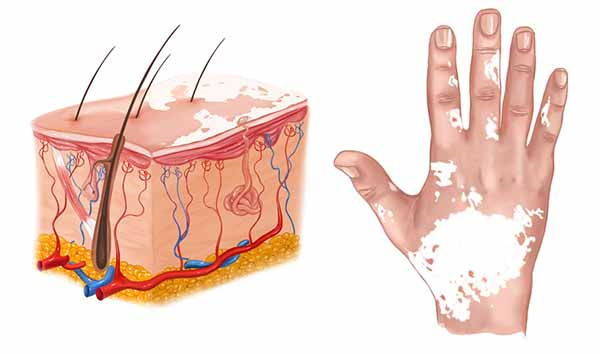 Vitiligo, again, could be configured as a symptom of a real pathology, as the 1 type diabetes and Addison's disease, diseases that cause an alteration or hyperactivity of the immune system.

Obviously, the appearance of white spots on the skin is the first sign. The most prone areas are those most exposed to sunlight (face and lips, arms, hands, legs and feet), but also groin and armpits, as well as the rectum, genital areas, eyes and navel.

Another symptom can also be a early whitening hair, beard, eyelashes and eyebrows. In people with dark skin, depigmented areas may also appear inside the oral cavity.
Furthermore, since the white patches are devoid of melanic pigment, the subject suffering from vitiligo is more sensitive to radiation and therefore to sunburn and sunburn. Also in this case, therefore, the advice to use adequate sun protection remains firm.

Finally, one third of those affected by Vitiligo suffer from pruritus, which could also be a wake-up call, since it indicates a possible worsening of the disease. 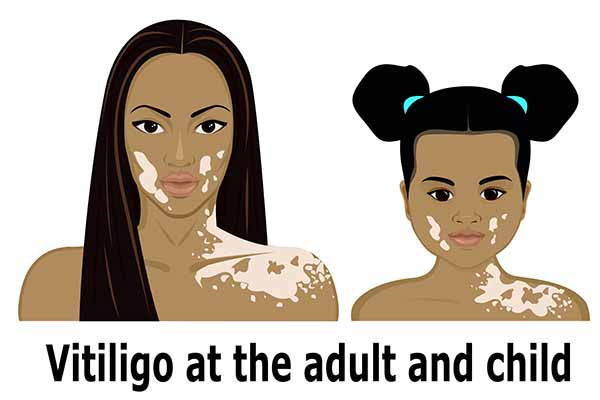 Vitiligo is a disease that affects 1% of children, especially Europeans and North Americans (Source vitiligo.info), in most cases it manifests itself before the age of 18-20, but sometimes even before the age of 8-10. Vitiligo hardly develops before 2 years of age.

The segmental form is more common among children and the most affected site is usually the trigeminal area, followed by the trunk, neck and upper and lower limbs.

Generally, vitiligo in children occurs very gradually and with limited lesions especially in the corners of the mouth and eyelids, in the genital areas and in parts of the body often subject to microtraumatism, such as elbows, back of fingers and tibial crests.

Vitiligo, is it cured?

Like all autoimmune diseases, too vitiligo is not permanently eradicated.

In consultation with your dermatologist, it is generally established on a case-by-case basis right therapy or the most suitable drug treatment. It all depends on which and how many parts of the body are covered by the patches and their size.

In addition to phototherapies, pharmacological treatments or surgical operations can be used.

1) Topical therapy: creams are often used, even containing creams corticosteroids, which can assist in the repigmentation of whitish patches
2) Phototherapy: it is carried out with the light or with the laser a excimer technology, but the results may only be transient
3) Photochemotherapy with psoraleni: known as "PUVA therapy", It is a long process that is often effective but which can induce unwanted effects, sometimes of a certain severity. Psolarene is a medicine that causes a certain reaction with ultraviolet rays and causes the skin to darken. The treatment requires theoral intake of the medicine or its topical application, to then expose the skin to UVA rays (sun or special lamps). This therapy can have side effects such as:

4) Depigmentation: in this case the white patches are not re-pigmented, but all the other areas lighten (“depigmentation”, which will tend to be permanent). To give this effect is also in this case a pharmacological product, the monobenzyl ether of hydroquinone or "monobenzene". This therapy can have side effects such as:

5) Autologous skin transplants: The skin of an unaffected area is implanted over an affected area of ​​the body
6) Skin transplants with blister grafts: blisters (vesicles) are generated with the application of thermal extremes or suction to the normally pigmented skin
7) Micropigmentation (tattoos): through the implantation of pigments in the skin
8) Autologous melanocyte transplants: after a sampling of unaffected tissue, melanocytes are cultured to be transplanted into areas of non-pigmented skin

There are remedies in nature that may be able to at least improve the appearance of skin affected by Vitiligo.
The first natural remedy is to eat naturally, eliminating as much chemicals as possible from your diet. Foods such as:

Better to avoid instead: 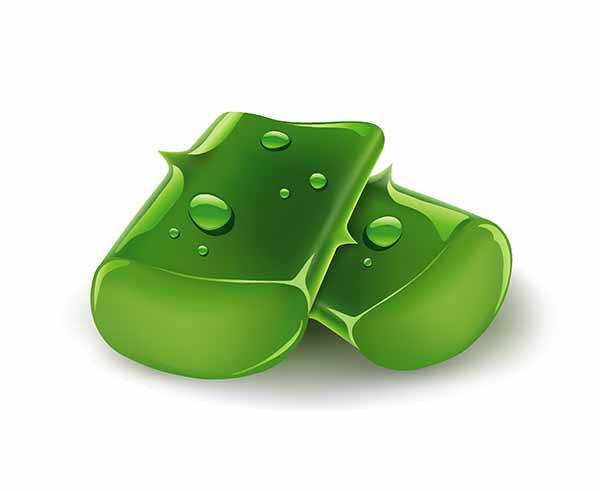 Among the natural remedies we include:

On skin diseases they may also affect you:

In all cases, remember that in order not to further worsen the situation it is better to protect yourself from the sun, because with vitiligo the UV rays become - if possible - even more harmful. You also reduce your stress levels and, above all, accept this "defect" which, in any case, makes you unique and special.

add a comment of Vitiligo: causes, types and treatment of white patches