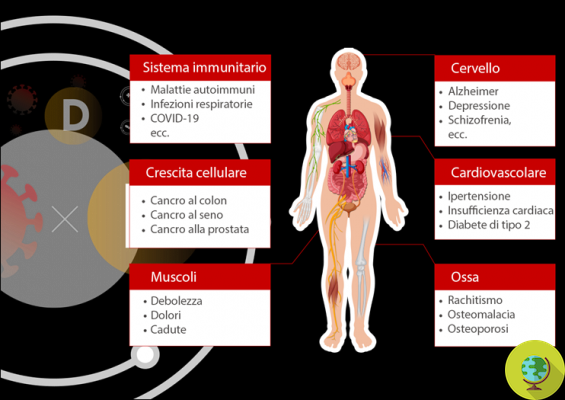 According to a new study, women with sufficiently high levels of vitamin D in their blood have a significantly lower risk of breast cancer.

Vitamin D, one more reason to stock up! Not only essential for the health of our bones and to keep the immune system active, but also very useful for reducing the risk of breast cancer. In fact, women with sufficiently high levels of this vitamin in their blood would have a significantly lower risk of breast cancer.


This is confirmed by a study by the University of California San Diego School of Medicine published in the journal Plos one, according to which the more vitamin D you have in your system, the less likely you are to develop breast cancer.

The merits of vitamin D when it comes to cancer prevention have long been at the center of medical debates. Studies have already revealed that the overall risk of cancer is lower in people with higher levels of this vitamin, since, in contrast, low blood levels of this substance have been associated with an increased risk of bladder cancer and, in a recent study, at a high risk of bowel cancer.

In addition to its fundamental role in bone metabolism, it is in fact established that vitamin D is also involved in other processes, such as the modulation of cell growth, neuromuscular and immune functions and the reduction of inflammation. As a result, vitamin D deficiency, in addition to bone disorders can also be linked to a number of other diseases, including metabolic, cardiovascular, autoimmune and tumors.

The Californian analysis involved two samples of women with an average age of 55, 3.325 and then 1.713 healthy women at the start of the study and monitored for an average of 4 years. During this period, 77 cases of breast cancer were diagnosed.

For now, scholars admit that there is not sufficient basis to demonstrate a cause-and-effect relationship between vitamin D deficiency and cancer risk but, given the amount of studies in favor, it is not difficult to link vitamin D to cancer prevention. What is now established is that Vitamin D is a real panacea and, between the right diet and regular and correct exposure to the sun, we must try to never miss it. Here are our tips on how to stock up on Vitamin D.