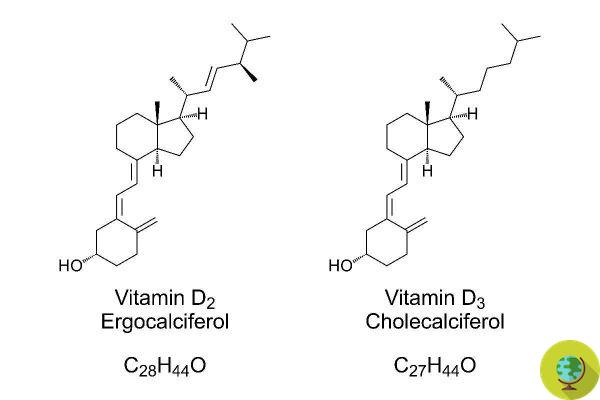 According to the researchers, vitamin D2 and D3 supplements do not have the same effect, as their way of acting can also change based on the ethnicity of the patients. But of the two types, only one is able to improve our immune system.

Vitamin D is essential for bone health, cellular function and immune function. Multiple studies show that low vitamin D levels are linked to a increased risk of fractures, as well as the development of some cancers, cardiovascular diseases and inflammatory diseases.

Of the two types of vitamin D, D2, or ergocalciferolo, is found naturally in plants and fungi, while D3, o cholecalciferol, found in animal products. Unlike D2, the body can produce D3 when the skin is exposed to the sun's UVB rays.

It is not known whether D2 and D3 have the same effect on human physiology; although some studies suggest that long-term supplementation has similar effects on blood vitamin D concentrations, others report that D3 supplements lead to higher concentrations than D2 supplements.

In a recent study, researchers analyzed thegene expression after vitamin D supplementation. They used data from a previously conducted study, lo studio D2-D3, who discovered that the D3 increased overall vitamin D levels more than D2. Following a genetic analysis, the researchers found that D3 and D2 affect different ethnic groups in distinct ways. They also found that the Vitamin D3 improves the immune system more in white individuals, as opposed to vitamin D2. (Read also: Vitamin D: all the consequences of a deficiency)

Lo studio D2-D3 included 335 women of Asian and European descent. The researchers randomized these individuals into three intervention groups for 12 weeks. The groups received 15 micrograms of vitamin D2, D3 or a placebo each day. The team selected 97 of the participants for genetic analysis, including 67 white and 30 South Asian participants. The researchers conducted a genetic analysis at baseline and again 12 weeks after the start of the supplementation.

At the end of the study, they noted that i Vitamin D levels in the D3 treatment group increased by 59% and 166%, respectively among those of white and South Asian ethnicity. Meanwhile, D3 levels decreased by 23% and 29% among those in the placebo group and by 52% and 53% among those who took only vitamin D2.

While, supplementation of D3 led to an increase in heme iron metabolism in patients from South Asia; the opposite effect occurred in white participants.

Although similar, they are indeed different molecules and are likely to bind slightly different targets or the same targets with different efficiencies. They are also metabolized differently.

The researchers note that the stark difference in results between ethnicities could be partly due to the small sample size, and relatively low baseline vitamin D levels for those of South Asian origin. However, they say their findings highlight emerging evidence as to how theethnicity, skin tone, vitamin D status, and susceptibility to contracting a virus such as SARS-CoV-2 can affect the effects of supplementation. They conclude that vitamins D2 and D3 can have different physiological effects, and that these can vary according to ethnicity.

On the vitamin D could it be interesting for you:

add a comment of Vitamin D: Do you know the difference between D2 and D3? Only one improves the immune system