Vitamin C best friend of iron: like ascorbic acid it facilitates its absorption 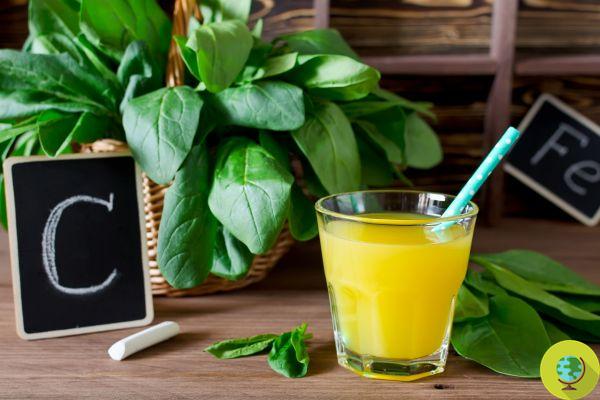 The iron found in vegetables is less bioavailable than the heme iron found in meat and fish. Thanks to Vitamin C, however, we can increase the absorption of non-heme iron: that's why.

What is iron and what is it for

Our body contains approximately 3,5 grams of iron: 65% of iron is said to be haemic because it is bound to blood hemoglobin, 10% is bound to myoglobin, 20-25% is deposited in the liver, spleen and bone marrow bound to ferritin and hemosiderin and the remaining percentage is found in cellular and circulating enzymes, bound to transferrin.
The daily requirement for iron is 10 milligrams, which rises to 18 milligrams in women.

Iron is a mineral indispensable in many physiological processes including cellular respiration, collagen synthesis and nucleic acid metabolism.

La iron deficiency it can be due to a reduced intake, insufficient absorption or excessive bleeding and causes fatigue, asthenia, headache, as well as increased susceptibility to infections and anemia.

THEexcess iron on the other hand, it can damage the organs to which this mineral is transferred, that is, the liver, pancreas, adrenal gland and heart.

Where iron is found, how it is absorbed and eliminated

Il iron it is found in large quantities in meat and fish as iron emic, but is also present in legumes, dried fruit, cocoa, green radicchio and spinach.

Foods rich in iron: the list (assimilable and not)

This is because the emic iron it is more soluble and is absorbed as such following the acid hydrolysis of the heme group, while the non-hemi iron present in plant foods is found in the form of ferric ion Fe3 + and is bound to other organic compounds including citrates, lactates, sugars. In order to be absorbed, the non-emic iron it must therefore be freed and reduced.

Iron is absorbed in the intestine, especially in the duodenum and jejunum, and its absorption is finely regulated to avoid excesses that could be very dangerous.

THEelimination of iron it is equal to about 1 milligram per day and occurs mainly through bile, feces, urine, menstrual blood. Our body reuses the iron recovered from the destruction of aged red blood cells: the resulting iron is more than 15 times higher than the losses.

The role of Vitamin C in iron absorption

As we have seen, the iron present in plants - that is, non-hemic iron - is less bioavailable than hemic iron, since it is found in the form of ferric ion Fe3 + and because it is often linked to other molecules present in plants.

In order to be absorbed, the Fe3 + must be reduced to Fe ”+ and this is where the comes into play Vitamin C: . Ascorbic acid is in fact a reducing molecule that converts Fe3 + into Fe2 +, increasing its absorption.

To influence the bioavailability of iron in any case it is a set of factors: the absorption of iron is in fact favored not only by the presence of reducing molecules, but also by calcium and by substances that keep it soluble. on the contrary, the bioavailability of iron decreases in the presence of phytates, oxalates, phosphates which form insoluble compounds with iron.

add a comment of Vitamin C best friend of iron: like ascorbic acid it facilitates its absorption