Vegetable meat substitutes are too rich in salt, the warning from the first study in the world on the healthiness of these products

Excessive levels of salt have been found in plant-based meat, which is considered healthier than meat equivalents.

Excessive levels of salt have been found in plant-based meat, which is considered significantly healthier than meat equivalents. How to do if there is too much salt?


It undoubtedly has fewer calories, less saturated fat, more fiber and above all it is not made of animal meat, but meat of vegetable origin could be excessively rich in salt, with all the burden of possible cardiovascular disease that it carries with it.

This is supported by a study published in the journal Nutrients, according to which the sodium content in vegetable meat is significantly higher than in meat equivalents, with more than three in four meat products exceeding the salt targets set for one. balanced diet.

In what was called the first ever study to investigate the nutritional profile and overall healthiness of plant-based meat available in the UK, the researchers analyzed 207 vegetable meat products and 226 meat products. The products were classified into six main groups:

What emerged is that plant-based meat has significantly fewer calories, total and saturated fat, and more fiber than meat equivalents. However, the content of sale it is significantly higher than that of meat in five out of six product categories.

The salt content of plant-based products was found to be "unnecessarily high", as the research reads, with more than 75% of products not meeting the Government's salt reduction targets in this British case. Only two plant-based products, among those tested, would be considered low-salt with a green label on the front of the package (i.e. <0,3g / 100g), compared to 45 meat products. 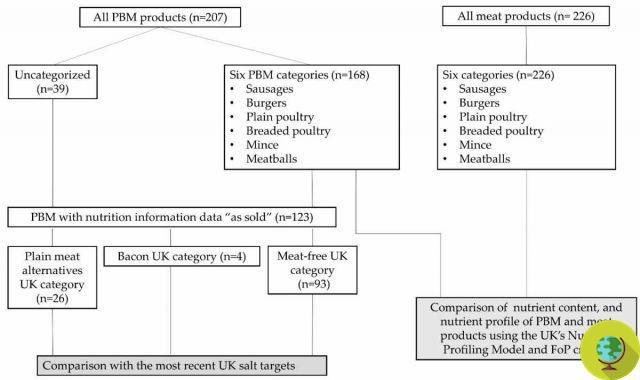 The health-conscious NGO Action on Salt is now calling on the government to restore a coherent salt reduction policy by imposing salt-related targets so that all food producers respect them and guarantee a level playing field.

Vegetable meat is a healthier alternative to meat as it has fewer calories and less saturated fat. However, our data shows that the salt levels in these products are unnecessarily high. Manufacturers have a vital role to play in providing consumers with products that are not only better for the planet and animals, but are 100% healthy and low in salt, concludes Roberta Alessandrini, researcher in Public Health Nutrition, Queen Mary University of London and lead author of the study.

So what alternative do we have? Maybe make burgers and vegetable meatballs at home, thus balancing the exact doses of everything we need (and perhaps totally eliminating the salt!): Here you will find 15 recipes for vegetable meatballs.

add a comment of Vegetable meat substitutes are too rich in salt, the warning from the first study in the world on the healthiness of these products