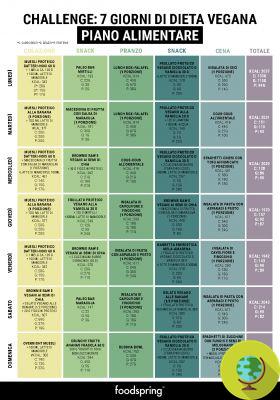 Susan Reese lost about 13 pounds and helped researchers at the University of South Carolina demonstrate which diet is best for weight loss. Result? According to the study, it would be vegan, which was more effective for losing weight than a vegetarian diet or diets that include fish or red meat.

Susan Reese lost about 13 pounds and helped researchers from the University of South Carolina to demonstrate which is the best diet to lose weight. Result? According to the study, it would be vegan, which was more effective for weight loss than a vegetarian diet or diets that include fish or red meat.

The research, published in The International Journal of Applied and Basic Nutritional Sciences, was conducted by Arnold School of Public Health. The team plotted the weight loss with 5 different types of diet in the participants, for which support groups, food education and healthy recipes have been made available.

The volunteers did not know which of the diet groups they would be assigned to. Those in the diet omnivorous he could eat everything. In the diet semi-vegetarian some meat was allowed. In the diet peach-vegetarian all meat was excluded, but not fish. In the diet Vegetarian food meat and fish were banned, but no cheese and eggs. Finally, only plant-based foods were allowed in the vegan diet. After six months, whoever had followed one vegan diet lost more weight than the other groups, averaging 4,3 percent.

A result that would reinforce the idea that a diet without animal products helps people lose weight. Gabrielle Turner-McGrievy, lead author of the study, acknowledges, however, that a vegan diet isn't easy for everyone. It can be particularly difficult to adapt, for example, in the first few weeks, and searching for meatless recipes can take time at first. But if you want to lose weight, it might be the best way.

The more positive side? Is that vegan diets are also rich in carbohydrates, long demonized when it comes to weight loss. "This study could help alleviate the fears of people who want to eat pasta, rice and other grains but want to lose weight," concludes Dr. Turner-McGrievy.

add a comment of Vegan diet: the best for weight loss?