Unsaid things are bad for the mind and body 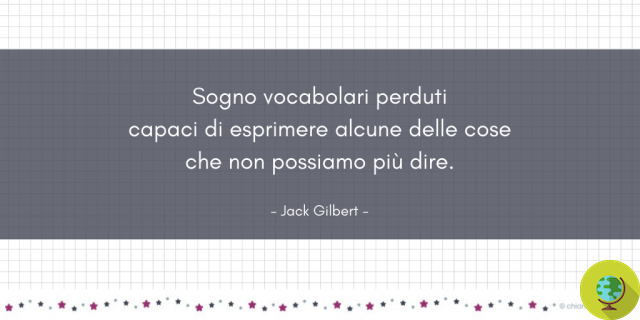 Things unspoken are bad for the mind and body. Saying things - only to ourselves or even "to others" - however, is not enough, for two reasons.

Unsaid things hurt: they stay in the mind and body, and they almost always take up space, they do everything they can to make themselves heard.


To do this they become disorders, diseases: in practice they take different forms depending on the person and the "substance" of the contents they carry (the same applies to unconscious experiences, that is, not so clear and conscious to the conscience).

For example, the oily cough - symbolically - it tells us that we want to remove from us something dirty, unwanted, annoying, suffocating, unpleasant, intrusive. If it becomes chronic, can highlight our feelings of anger and aggression against a certain situation. The mall in stomato it undoubtedly expresses the difficulty in "digesting" the situations we are experiencing and anger. The backache it often warns us of a burden that is too heavy for us; there cystitis it can be caused by the perception of an invasion of territory against which we do not want or can rebel. The headache shows us a crowding of disturbing thoughts that we rationally try not to say and keep under control.

And the lump in the throat? There you can find the sadness or pain not expressed which presses to become a verb. Probably all, from personal experience, we also know that - if you have the opportunity to "tell" - that "knot" then melts, is transformed. It's not a casuality. Of course, you could download that "emotional tension" only physically (for example by doing sports, a walk or throwing punches at a pillow) but if you are able, then, to pass through the language as well, the effect of overall well-being can result without greater doubt.

The reason can be easily understood: the word has in itself a creative aspect; gives shape, makes the implicit explicit: it allows us to manifest and recognize (it is no coincidence that science states that the universe was born with a Big-Bang; the sacred texts say that in principle was il Logos, the God active in Creation: in both cases we are in the word, in the sound).

Saying things - only to ourselves or even "to others" - however, is not enough, for two reasons.

The first: how words altrui they can take away a lot of physical and mental energy (especially when they come as unexpected hurricanes and impact our entire emotional and energy system: we need more or less time to "reorganize" even in thought) or hurt us even physically (we perceive them as "punches in the stomach", they stimulate a "bile attack", they leave us "breathless") also the terms we use will have an effect, will produce consequences "in us and around us".

So whatever the feelings, thoughts and things to "say", we should pay attention in choice of our words, way of putting them together, tone with which we express them, avoiding the possible and reactive intention of hurting others.

The second reason is linked to a "healthy selfishness": Trying to remain alone in the will of tell yourself in a constructive way, the choice of contents and expressions we use (even if the context is unpleasant, difficult, painful) it helps to clarify and bring in us a new point of balance and harmony. Of healing. Which will inevitably be reflected in the way we perceive the situation, the relationship, the people.

And so, between saying and doing, it comes even closer to the goal of our most authentic Self, the spiritual one, which does not just want us in health but aims to make us grow in awareness and love. In short, all-round.