Two servings of fruit and three of vegetables: the magic formula of longevity (but the potato doesn't count) 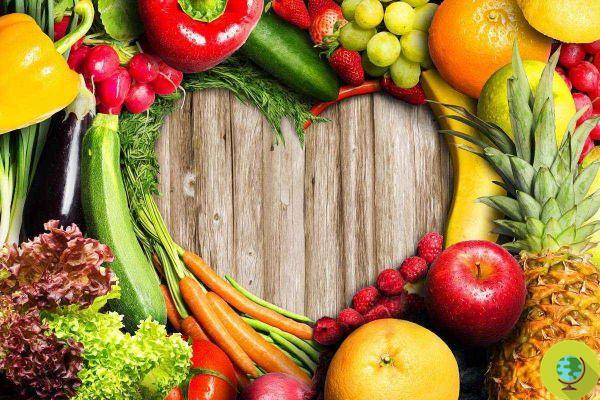 The right mix, according to a new study, consists of 2 servings of fruit and 3 servings of vegetables per day

An apple a day keeps the doctor away? Yes, and it also makes you live longer if we add another portion of fruit and three of vegetables to our diet every day. A new study, conducted by Harvard University, claims that higher fruit and vegetable consumption is associated with a lower risk of death.


That they are good for health has been amply demonstrated but a new study has calculated the optimal doses to protect the heart, to the benefit of longevity: 2 servings of fruit and 3 of vegetables are a mix that would allow everyone, regardless of gender, to live longer.

The study, published in the American Heart Association's journal Circulation, drew on data from 0 million adults worldwide and concluded that five daily servings of fruit and vegetables is probably the optimal amount for a longer life. .

Diets rich in fruits and vegetables help reduce the risk of numerous chronic health conditions that are leading causes of death, including cardiovascular disease and cancer. However, only one in 10 adults eat enough of it, according to the U.S. Centers for Disease Control and Prevention.

Wang and colleagues analyzed data from the Nurses' Health Study and the Health Professionals Follow-Up Study, two studies that included more than 100.000 adults who were followed up for up to 30 years. Both included detailed dietary information collected repeatedly every 2 or 4 years. For this analysis, the researchers also collected fruit and vegetable intake data from 26 studies that included approximately 1,9 million participants from 29 countries and territories in North and South America, Europe, Asia, Africa and Australia.

Not all foods are created equal

But be careful not to generalize. Not all types of fruit and vegetables offered the same benefits. For example: starchy vegetables, such as peas and corn, fruit juices and potatoes they were not associated with a reduced risk of death from all causes or from specific chronic diseases. In contrast, green leafy vegetables, including spinach, lettuce, and kale, and fruits and vegetables rich in beta carotene and vitamin C, such as citrus, berries, and carrots, have shown significant benefits.

"Our analysis in the two cohorts of US men and women produced results similar to those of 26 cohorts around the world, which supports the biological plausibility of our results and suggests that they can be applied to larger populations," said Wang. . "This amount probably offers the greatest benefit in terms of preventing major chronic diseases and is a relatively achievable intake for the general public."

A limitation of the research is that it is observational and has not focused on a direct relationship of cause and effect. Despite this, it is undoubtedly yet another confirmation of the health benefits of these foods.

One more reason to consume them, always trying to pay attention to the origin and preferring those in season and Km0.

add a comment of Two servings of fruit and three of vegetables: the magic formula of longevity (but the potato doesn't count)