TV series: If you compulsively watch one episode after another you may have these problems


Watching one TV series after another, episode after episode, is not healthy behavior that can be addictive, a bit like online games. A study led by Jagiellonian University (Poland) last November identified personality traits that can lead to the practice of binge-watching and its most dangerous consequences.

Binge-watching is a modern phenomenon where viewers spend countless hours watching TV series. And in the "distant" 2013 Netflix itself conducted a survey to understand its spread, noting that in fact the trend was growing and that this practice was highly appreciated in most cases.

However, a growing body of research suggests that there may be negative consequences to this behavior, similar to other addictive activities such as online gaming. According to what Polish researchers write, this "compulsive" habit is particularly problematic in subjects characterized by impulsiveness and flight instincts.

Times have indeed changed a lot. In the past, viewers had to wait for the next episode of a television novel or a soap opera and these lasted for years if not decades. In more recent times, the TV series have arrived, shorter but still broadcast in episodes broadcast even at a distance of one week from each other. And anyway, we had to wait patiently.

In the world of "everything and immediately" then the platforms arrived where everything is loaded and always available, and binge-watching arrived: "shoot yourself" bet on episodes one after the other, "all and immediately" (or almost) .

And no, it's not exactly healthy behavior. 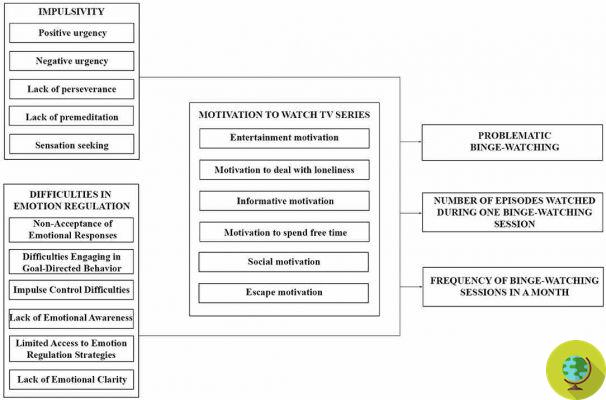 The Polish study was conducted on a group of volunteers consisting of 645 participants, on whom impulsive behavior, difficulty in controlling emotions, and other psychological characteristics were assessed by means of a scale, compared on the level of binge-watching, with an analysis regressive to determine the presence of any correlations.

Our results show that lack of forethought, impulsiveness, and a tendency to avoid evasion are all significant predictors of problematic behaviors related to binge-watching - the researchers write - as well as motivation to cope with loneliness and to make the most of one's free time.

Of course, the researchers point out, it's premature to say with certainty that binge-watching is as dangerous as other addictive behaviors until more research is done. Also because this work was limited to Polish volunteers and should at least be extended to other nationalities.

But these results still constitute an alert on which to investigate. In fact, even theanxiety and trough significant factors were found and this should not be ignored.

Especially since streaming platforms have every interest - and they do - in inducing curiosity. Although some have already made some changes to help viewers control their behavior, for example introducing the option for disable auto play of another episode.

The work was published in Frontiers in Psychiatry.

add a comment of TV series: If you compulsively watch one episode after another you may have these problems