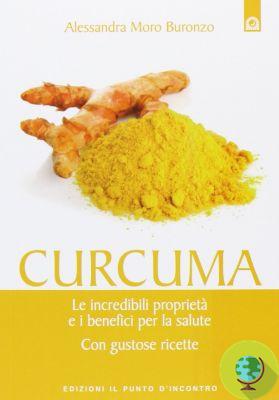 Turmeric is a yellow-orange spice from India. For centuries it has been, and still is, one of the fundamental ingredients of Middle Eastern and Southeast Asian cuisine. For its beneficial and healing properties, turmeric is traditionally used both in Ayurvedic medicine of Indian origin and in Chinese medicine, in particular for its ability to counteract inflammatory processes within the body.

CURCUMA, THE EXTRAORDINARY properties - La turmeric is a yellow-orange spice from India. For centuries it has been, and still is, one of the fundamental ingredients of Middle Eastern and Southeast Asian cuisine. For his beneficial and healing properties turmeric is traditionally used in both Ayurvedic medicine of Indian origin, both in the Chinese medicine, particularly for its ability to counteract the inflammatory processes within the body.

To recognize the positive potential of turmeric on our health is now the western medicine, of whose studies it has increasingly proved to be at the center over the last few years.

A study conducted by the University of California has highlighted it as one of the components of the turmeric, curcumin, is capable of block the action of an enzyme thought to be responsible for the development of tumors in the head and neck area. During the study, patients with these conditions were given tablets containing 1000 milligrams of curcumin. The results obtained were evaluated by an independent laboratory, which showed that this substance acted inside the oral cavity of patients by inhibiting the cancer-promoting enzyme, thus paving the way for the use of curcumin in treatment and prevention. of this pathology. Additionally, another University of Michigan study demonstrated its importance in increasing the effectiveness of chemotherapy in treating this type of cancer.

The University of Maryland's Medical Center presents curcumin as a powerful antioxidant, able to counteract the action of free radicals, responsible for aging processes and capable of damaging the membranes of the cells that make up our body. Antioxidants would be able to both reduce and prevent damage caused by the action of free radicals. Furthermore, curcumin would be capable of lower the levels of two enzymes capable of causing inflammatory processes within the body.

The anti-inflammatory properties of turmeric have been subjected to painstaking research by Dr. Randy J. Horwitz, medical director of the Arizona Center for Integrative Medicine. In a paper written specifically for the American Academy of Pain Management, he describes turmeric as one of the most powerful natural anti-inflammatories in the world. Turmeric has also been studied to evaluate the effectiveness of its use at a medicinal level in the treatment ofrheumatoid arthritis.

According to Los Angeles nutritionist Natalie Kling, an expert on naturopathy, turmeric would enjoy antioxidant, anti-inflammatory, antiseptic properties and more. In fact, the doctor recommends turmeric, in particular in the form of a supplement, such as natural pain reliever against joint pain. It also recommends using this raw spice as much as possible on dishes, which it is able to enrich with its delicate taste.

READ also: How to grow turmeric

We suggest a book on turmeric, practical, fun and with tasty recipes:

Turmeric. The extraordinary virtues and health benefits. With tasty recipes

Turmeric for itching, psoriasis and eczema. How and when to use it for the skin ❯

add a comment of Turmeric: the extraordinary healing properties