Turmeric: strengthens the immune system and protects against infections 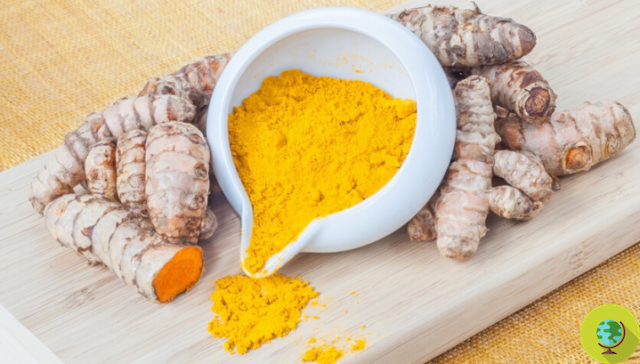 Another valuable property of turmeric has been discovered. According to recent studies, the famous spice of Indian origin is able to strengthen our body and the immune system!

At all curry! Another precious discovery properties of turmeric. According to recent studies, the famous spice of Indian origin is capable of strengthen our body and the immune system!


Finally - after many hypotheses and deductions - the scientific confirmation has arrived: the turmeric strengthens the immune system e protects our body from external attacks, such as infections and inflammation.

To reiterate the extraordinary properties of the Indian spice - a yellow-gold powder from the root of a plant belonging to the Zingiberaceae - used mainly for preparation of curry is an American study conducted by scientists at Oregon State University, who analyzed the effects of the spice, and in particular of curcumin (fundamental substance contained in turmeric) on the activation of a gene of the immune system.

According to the research, funded by the National Institutes of Health and also disclosed on the Journal of Nutritional Biochemistry, curcumin would increase the levels of a protein that regulates innate immune response. It is about proteina CAMP (antimicrobial peptide cathelicidin), essential for protect the body from attack by viruses, fungi and bacteria, also famous for its anti-tuberculosis and sepsis control action. The action of this particular protein is strengthened by the consumption of vitamin D, but - according to this study - also by curcumin, which raises the levels of CAMP and allows an increase in the anti-inflammatory and antioxidant action.

According to the scientists who conducted the research therefore, the regular consumption of turmeric (and therefore curcumin) could help the human body to defend itself from the attack of certain infections, especially those affecting the intestinal tract and stomach.

As many other studies have already confirmed over the last few years, curcumin is a real elixir of life, because it helps prevent cancer (especially the one that attacks the head and neck area), it naturally increases the beneficial effect of chemotherapy in the treatment of cancer, counteracts the action of free radicals and thus slows down the aging processes; it is useful for preventing and fighting rheumatoid arthritis and - as some neuropathy studies had already hypothesized - it also has anti-inflammatory, antiseptic and pain-relieving properties.

But there is more! According to other studies, curcumin has beneficial properties for the liver, for diabetes and cholesterol and it would even seem to increase the effect of retro viral drugs used in the treatment against HIV (some doctors recommend consuming 8 tablespoons of turmeric mixed in a liter of tomato) and to stop the advance of the virus more effectively!

- Spices: 7 DIY mixes from the world to give more flavor to our favorite dishes

add a comment of Turmeric: strengthens the immune system and protects against infections