Turmeric for itching, psoriasis and eczema. How and when to use it for the skin 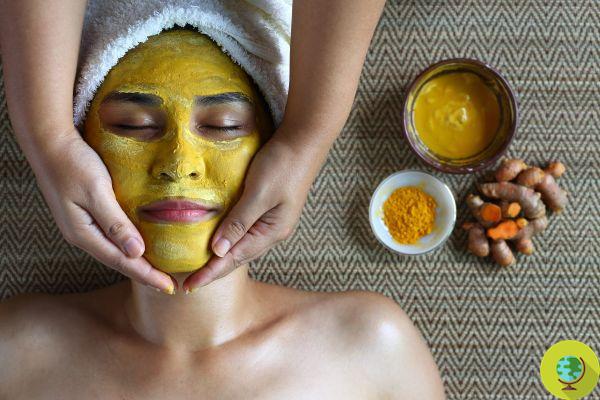 La turmeric (Curcuma longa) is a well-known spice native to India, also used in traditional Ayurvedic and Chinese medicines and in herbal medicine.


Thanks to anti-inflammatory and antioxidant properties, turmeric can also be used for skin care, in particular to soothe skin redness and itching caused by eczema and psoriasis.

Let's see how and when to use turmeric safely for skin health.

Psoriasis and eczema, what they are

Psoriasis ed eczema they are very common and different skin diseases.
Psoriasis is an autoimmune disease that affects 1-2% of the population globally, causing chronic inflammation of the skin.
People suffering from psoriasis have characteristic skin plaques initially red and subsequently covered with silver scales. The plaques of psoriasis, in addition to causing great aesthetic discomfort, cause inconstant itching and, at times, pain.
La cause the onset of the disease is unclear and there is probably a genetic origin. There is currently no definitive cure for psoriasis and the disease tends to regress and worsen over the course of life, worsening in case of severe stress.

THEeczema it is instead a dermatitis that affects 15-30% of children and 2-10% of adults causing skin inflammation, dry skin and itching.
As with psoriasis, the cause of eczema is also unknown and it is hypothesized that there are constitutional and environmental factors behind the disease.
I treatments for eczema include topical moisturizing and anti-inflammatory products to apply to soothe symptoms.

Benefits of turmeric for psoriasis

Il turmeric rhizome it contains colored substances called curcuminoids, of which curcumin is the most important component, an essential oil, monosaccharides and polysaccharides.
Turmeric has now recognized anti-inflammatory properties, as well as a strong antioxidant activity.

In available studies, turmeric has been shown to be capable of decrease the inflammation caused by psoriasis for both topical and oral use.

In particular, the oral administration of highly bioavailable curcumin extracts for a period of 20 days, as well as the application of gels containing 1% curcumin, have been shown to be able to reduce skin inflammation and plaque formation. typical of psoriasis.

In available studies, taking curcumin was shown to be safe and free of side effects.

Benefits of turmeric for eczema

In the countries of origin, the properties of turmeric have always been exploited for the treatment of symptoms of eczema.
In a study conducted on 150 people, the daily application for one month of creams containing curcumin was shown to be able to reduce by more than 30% the itching, redness and swelling of the skin associated with atopic dermatitis and urticaria.
However, the cream under study also contained other anti-inflammatory herbs, so it is not possible to determine whether turmeric alone can alleviate these symptoms.

A recent review that looked at the results of 18 studies, however, yielded good results regarding the use of curcumin to treat eczema both topically and orally.

Also in this case the administration of curcumin has been shown to be safe but it should be emphasized that the studies available have been carried out on adults and not on children, more affected by eczema than the adult population.

Generally taking turmeric is considered safe for both adults and children, but before giving curcumin-based supplements for prolonged periods or on children it is preferable to consult a doctor or pediatrician.

How to use turmeric for skin

In case of skin problems such as psoriasis or eczema, it is possible to use supplements, pesticides or curcumin-based creams to soothe the symptoms.

Since the curcumin has a poor bioavailability and given that psoriasis and eczema are diseases for which it is necessary to be followed by a doctor, in case of oral intake it is preferable to consult your dermatologist to find out if turmeric can help based on your condition and to know the correct dosage to take.

For topical use, a turmeric-based cream can be applied once a day to the areas affected by psoriasis to soothe redness, irritation and itching.

Anyone looking for a simple and safe remedy to be made in a few minutes to get immediate relief for the skin you can try this DIY mask.

To prepare it, simply mix half a teaspoon of turmeric powder with a teaspoon of honey and apply the mixture on the areas to be treated. After leaving the pack on for at least ten minutes, it can be rinsed off with warm water.

Turmeric masks and wraps can be made once or twice a week and turmeric does not stain the skin permanently.

Turmeric: strengthens the immune system and protects against infections ❯

add a comment of Turmeric for itching, psoriasis and eczema. How and when to use it for the skin