Turmeric: Beware of interaction and side effects with these drugs 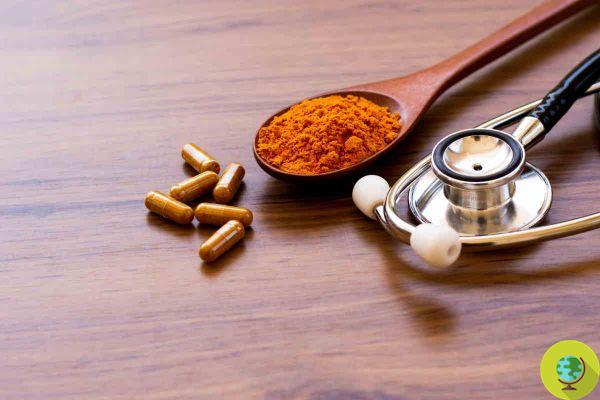 Turmeric and drug interaction, here are which medicines it is not recommended to take

Turmeric and drug interaction, here are which medicines it is not recommended to take


La turmeric in addition to being a useful spice in the kitchen, it is also a powerful natural remedy that can be used to treat various ailments. However, the dangerous interaction with some drugs must be considered. Here are which medicines it is not recommended to take turmeric with.

Most of the health benefits of turmeric are due to its most important active ingredient, curcumin. In fact, scientific studies have shown that this substance has anti-inflammatory, anti-oxidant, anti-carcinogenic and anti-thrombotic effects.

It is thanks to all these beneficial properties that in some cases turmeric is also recommended as an alternative to traditional drugs or in combination with them in the treatment of certain health problems. The idea is certainly to avoid possible complications and side effects that can occur when taking high doses of drugs.

Although all of this is true, the effect of turmeric itself should never be underestimated, whether taken alone in the form of a high-dose supplement or combined with certain medications which could limit or otherwise enhance the effect.

So let's see what are the categories of drugs with which turmeric interacts:

Turmeric has anti-thrombotic properties, which means that it is able to reduce blood clots. This feature, however, makes it dangerous if you already use drugs to thin the blood. Taking this spice in conjunction with anticoagulants can in fact strengthen their effects by increasing the risk of internal bleeding. Blood-thinning drugs include, for example, Heparin, Warfarin (Coumadin), Clopidogrel (Plavix), and Cardioaspirin.

Turmeric naturally normalizes stomach acid but when taken together with drugs that have the same purpose such as Cimetidine (Tagamet), Famotidine (Pepcid), Ranitidine (Zantac) and Omeprazole, it can cause some reactions. Taken in combination with them will increase the production of stomach acid in the body and this can cause nausea, bloating and stomach pain as well as damage to the esophagus.

Turmeric naturally lowers blood sugar levels, but when taken in conjunction with diabetes medications, the effect could cause blood sugar to drop further, causing hypoglycemia. This can lead to a variety of side effects including tremors, anxiety, blurred vision, delirium, and reduced overall cognitive function.

People taking antihistamines may experience problems with concurrent consumption of turmeric. The interaction between the active ingredients can in fact cause allergic reactions generating episodes of hives or skin rashes but also shortness of breath.

In conclusion we can say that if it is true on the one hand that turmeric is a natural product, it is not equally true that it is always possible to use it lightly. In fact, this spice has possible side effects to consider as well as it can trigger interactions with drugs.

Do-it-yourself is more than ever recommended especially in the case of previous pathologies. Always ask your doctor for advice in order to avoid any kind of risk.

Sull 'drug interactions, foods and other natural remedies may also interest you:

On the turmeric see also:

add a comment of Turmeric: Beware of interaction and side effects with these drugs