Turmeric-based supplements: the cases of hepatitis ascertained by the ISS are 10. MARCHE and LOTTI 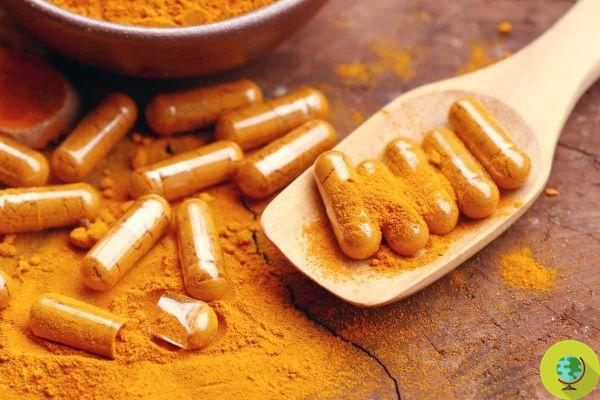 New turmeric supplements withdrawn due to hepatitis risk. There is talk of as many as 9 cases, although the number has risen to 10. This was confirmed by the Ministry of Health

New turmeric supplements withdrawn due to hepatitis risk. There is talk of as many as 9 cases, although the number has risen to 10. This was confirmed by the Ministry of Health.


It is still alarming for supplements-based curcumin. Initially, there were 2 confirmed cases of hepatitis, then the number had risen to 9 but in recent days there have been other reports.

In accordance to reported by the ministerial authorities, on 17 May the Istituto Superiore di Sanità reported as many as 9 cases of acute cholestatic hepatitis, non-infectious and non-contagious, linked to the consumption of turmeric.

“Investigations are underway to identify the cause responsible for the cases of hepatitis. Consumers are advised as a precaution to temporarily suspend the consumption of these products ", reads the notice.

Last week, only 2 supplements were withdrawn but now the list of those at risk has grown.

Yesterday, the National Institute of Health has reported 10 cases of acute, non-infectious and non-contagious cholestatic hepatitis, attributable to the consumption of turmeric. A series of checks are underway by the health authorities.

"The tenth case was associated with the consumption of: Curcuma 95% Maximum lot 18L264 expiry 10/2021 produced by EKAPPA LABORATORI srl on behalf of Naturando Srl"

Here is the list of all the products reported:

The Higher Institute of Health had confirmed that these were the supplements produced by NI.VA di Destro Franco & Massetto Loretta SNC with registered office in via Padova 56, Vigonza (PD), produced by the FRAMA SRL plant in Noventa Padovana (PD).

The ministry and the National Institute of Health have appointed a commission of experts to study the situation. There curcumin in fact it is not dangerous, on the contrary. This is why we are trying to understand what is the origin of the contamination responsible for cases of hepatitis, contamination that affects different brands and products.

In any case, if you have purchased them, avoid using them.

add a comment of Turmeric-based supplements: the cases of hepatitis ascertained by the ISS are 10. MARCHE and LOTTI