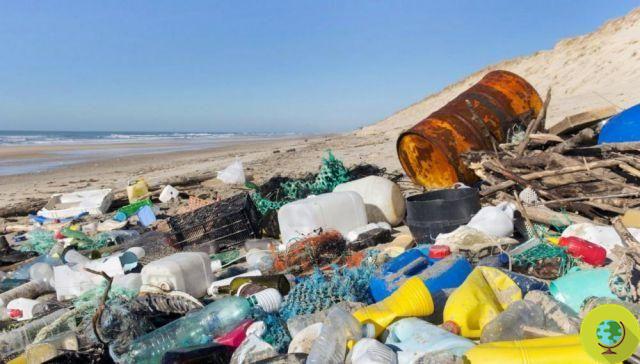 Plastic waste could be used to make fuel. A new study has developed a technique that can transform millions of tons of plastic, almost a quarter of the waste, into a fuel similar to gasoline or diesel

Plastic waste could be used to make fuel. A new study has developed a technique that can transform millions of tons of plastic, nearly a quarter of the waste, into a fuel similar to gasoline or diesel.


The world is drowning in plastic. Every year, over 300 million tons of waste ends up in landfills, the environment and the sea. Even children now know that it takes hundreds of years for plastic to decompose. In the meantime, it has killed or endangered the life of wild animals.

If reducing the use and consequently the production is the number one rule, on the other hand we try to find useful solutions to manage plastic at the end of its life, starting from a correct separate collection.

A team of chemists from Purdue University may have found a partial solution to our problems. They have devised a way to convert the Polypropylene, a type of plastic commonly used in toys, medical devices and packaging such as potato chips, gasoline and fuel similar to diesel but less polluting. In their opinion, this fuel is suitable for use as blendstock, one of the main components of the fuel used in motor vehicles.

The technology, devised by Wang, Kai Jin, a student, and Wan-Ting (Grace) Chen, a postdoctoral researcher at Purdue, can convertand over 90% of polyolefin waste in different products, including pure polymers, naphtha, fuel or monomers.

Driven by the frightening numbers associated with marine littering, Wang realized he had to do something. Of all the plastics produced in the last 65 years (8,3 billion tons), about 12% was incinerated and only 9% was recycled. The remaining 79 percent went to landfills or the oceans. The World Economic Forum predicts that by 2050, the oceans will contain more plastic than fish.

Once the plastic is converted to naphtha, it can be used as a feedstock for other chemicals or further separated into special solvents or other products. The fuels derived from this process would be able to satisfy 4% of the annual demand for gasoline or diesel.

“These plastics degrade slowly and release toxic microplastics and chemicals into the soil and water. It is a catastrophe, because once these pollutants are in the oceans, it is impossible to fully recover them, ”Wang said.

The team is working to optimize the conversion process to produce quality gasoline or diesel fuels.

The study was published in ACS Sustainable Chemistry and Engineering.

add a comment of Transforming tons of plastic waste into low-polluting gasoline and diesel is now possible (and without incinerating).