Traces of cow's milk in vegetable drinks OraSì: how did this happen? The lots withdrawn

Vegetable drinks with walnut and hazelnut with traces of milk not present on the label. The Simply and Coop supermarkets have withdrawn two products because their consumption could be risky for those who are intolerant or allergic to milk. Also withdrawn cocoa soy milk

Vegetable drinks with walnut and hazelnut with traces of milk not present on the label. The Simply and Coop supermarkets have withdrawn two products because their consumption could be risky for those who are intolerant or allergic to milk. Also withdrawn cocoa soy milk.


This was made known by the two chain stores, which withdrew the two vegetable drinks from the shelves of their stores due to the presence of milk, potentially dangerous for allergy sufferers. 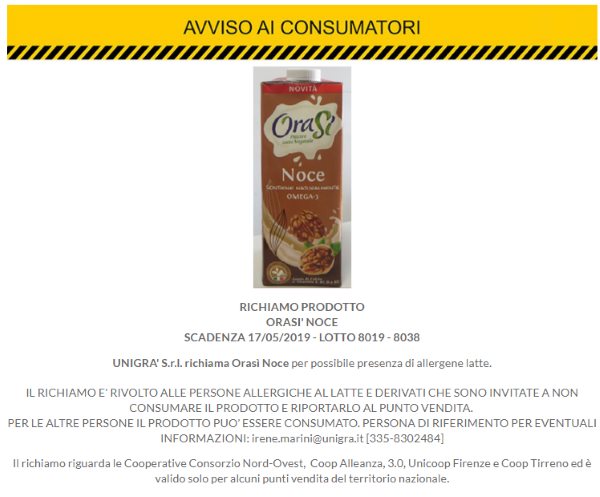 The two drinks were collected by Cooperative Consorzio Nord-Ovest, Coop Alleanza, 3.0, Unicoop Firenze and Coop Tirreno, the withdrawal is valid only for some points of sale in the national territory. 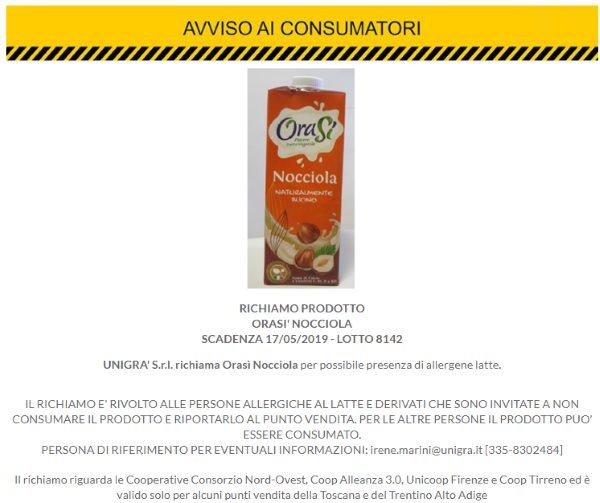 The withdrawal for Simply stores currently only concerns the walnut drink.

“The recall is aimed at people allergic to milk and dairy products who are asked not to consume the product and bring it back to the point of sale. For other people, the product can be consumed ”, reads the Coop website.

It also adds OraSì with a post on Facebook that the recall also concerns cocoa soy milk with lot 8018 and expiry date 15/10/2018.

On the one hand, the company reassures non-allergic consumers, but on the other hand we asked ourselves how milk of animal origin can be finished in vegetable drinks. The explanation is simple: OraSì is a brand of Unigrà, a company that for its own same definition

“Operates in the sector of transformation and sale of edible oils and fats, margarines and semi-finished products for food production, in particular confectionery”.

Among his products in fact we also find lard, creams and desserts, ice cream products of animal origin, but also Palm oil, a not insignificant aspect for those who choose to consume vegetable drinks for ethical reasons.

add a comment of Traces of cow's milk in vegetable drinks OraSì: how did this happen? The lots withdrawn