Traces of aluminum in the coffee you drink. The real risks for mocha and waffles, according to some studies

Some studies point out that we shouldn't worry too much about the release of aluminum from mocha and coffee pods.

It is difficult to deprive oneself of the pleasure of a good coffee even if in recent years the concern for the release of aluminum by the moka with which we prepare it every day has emerged several times but also from the capsules and pods for espresso coffee. What risks do we really run? Some studies have dealt with this very topic, let's see what they discovered.

A study conducted by the Istituto Superiore di Sanità wanted to verify the release of aluminum particles from various common utensils in our kitchens including the moka. As far as coffee is concerned, it was found that the quantity of aluminum that actually reached the cup after boiling the water was always below the minimum value found (0,001 mg / kg).

According to this study, the average release of aluminum particles is between 300 and 450 micrograms per kilo. In cases where it is higher, it reaches about 800 micrograms, however well below the milligram / kilo. 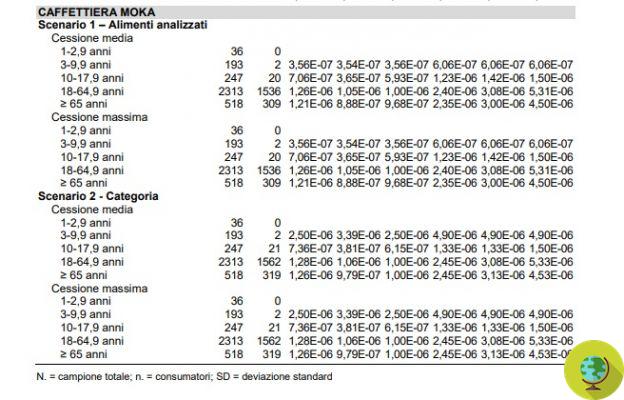 The ISS therefore concludes that:

The problem, however, as highlighted by a special report of 2019, is that those already present in the coffee are added to these levels of aluminum released by the moka.

To learn more read also: Coffee: watch out for the aluminum released by the mocha (and not only)

Aluminum released from pods and capsules

A similar situation is also evident when pods and capsules are used. In this regard, there is a German study that shows how these tools for making coffee are substantially safe in terms of aluminum release. Rather, the emphasis is on the release of this substance from the water bottles (obviously those made of aluminum).

In fact, the conclusions of the study read that:

"It has been shown that drinking a mixture of apple juice and mineral water in an aluminum bottle can achieve 86,6% of the total weekly intake (TWI) for adults and drinking tea from an aluminum bottle can exceed TWI (145%) for a child weighing 15 kg. On the contrary, preparing coffee in an aluminum moka is at most 4% of TWI, if you consume an average of 3,17 L of coffee per week and even if you wash it in the dishwasher, against the explicit instructions of the manufacturer ".

The research also points out the importance of washing aluminum objects correctly. Abrasive sponges should never be used as they could ruin the protective film of the mocha and favor the release of aluminum particles.

But returning to the release of substances by pods and capsules which, we remember, are also polluting and difficult to dispose of, we told you about another study that measured the amount of phthalates and heavy metals released from aluminum, plastic and biodegradable material.

The results on that occasion had shown a release of phthalates in similar quantities in the different capsules analyzed but also the presence of significant quantities of lead and nickel.

Finally, the National Committee for Food Safety (CNSA) of the Ministry of Health reminds us of the importance of correctly using, storing and treating with care any container made of aluminum. The constant monitoring of MOCAs (Materials and Objects in Contact with Food), which present greater risks for small children, pregnant women and the elderly, is fundamental.

The release of aluminum from tools we use every day (and we're not just talking about mocha or coffee pods) is a problem that we absolutely must not underestimate.

Cough? Try this natural remedy with banana and honey ❯

add a comment of Traces of aluminum in the coffee you drink. The real risks for mocha and waffles, according to some studies