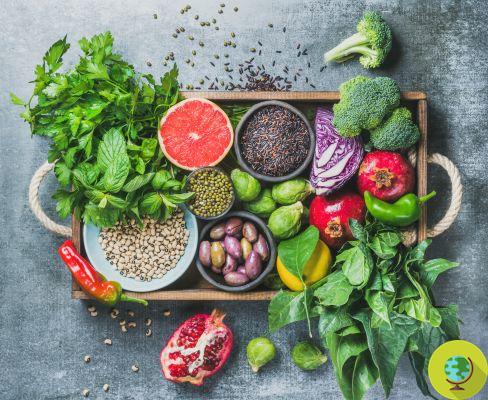 Women who aspire to become moms should pay close attention to the fruits and vegetables they put on the table. A new Harvard study has found a link between the consumption of foods rich in pesticides and reduced fertility.

Women who aspire to become moms should pay close attention to the fruits and vegetables they put on the table. A new Harvard study, after investigating the effects of plagues on spermatozoa, has in fact found a link between the consumption of foods rich in herbicide residues and reduced female fertility.


When a woman tries to get pregnant she is always advised to adopt a healthy diet, rich in fruit and vegetables as these natural products contain important fibers and vitamins such as folic acid, essential for the well-being of the fetus. This undoubtedly remains good advice but, according to a new study published in the journal JAMA Internal Medicine, women who eat 2 or more servings of high-pesticide fruit and vegetables every day have an 18% lower chance of getting pregnant and a 26% lower chance of carrying the pregnancy to term.

The study was conducted on 325 women between 18 and 45 who underwent anti-sterility treatments with assisted reproductive technology at Massachusetts General Hospital. Researchers provided participants with questionnaires to learn more about women: height, weight, general health, supplement intake, and more. They then analyzed each participant's exposure to pesticides by determining whether the fruit and vegetables she consumed were treated with high or low levels of pesticides.

Scientists assessed pesticide levels based on reports from the US Department of Agriculture's Pesticide Data Program which monitors the presence of these chemicals in foods sold throughout the United States. The fruits most contaminated by pesticides were strawberries followed by peaches, spinach and peppers while avocados, onions, prunes, corn and orange juice have much lower residues.

The results were quite shocking: Compared to women who ate less than a daily portion of high-pesticide fruit and vegetables, those who ate more than 2 were 26% more likely to have a miscarriage.
In this regard, Dr. Yu-Han Chiu, first author of the study and researcher in the nutrition department at Harvard TH Chan School of Public Health, said:

“Most Americans are exposed to pesticides every day from consuming traditionally grown fruits and vegetables. For some time there have been concerns that exposure to low-dose pesticides through diet (such as the one we observed in this study) may have adverse health effects, particularly in sensitive populations such as women in pregnancy and their babies. Our study shows that this concern was not unjustified ”.

On the relationship between pesticides and fertility, you may also be interested in:

Although the researchers report that it is extremely important to verify, through new studies, that the results obtained are correct, they also advise future mothers to consume fruit and vegetables with a low level of pesticides, preferably from organic farming. A tip that we always give you, regardless of whether you are pregnant or belonging to the male sex. It is a good idea to always wash fruit and vegetables with a solution of water and baking soda.

Too many pesticides in these black-eyed beans: The Ministry withdraws from the market 500gr ❯