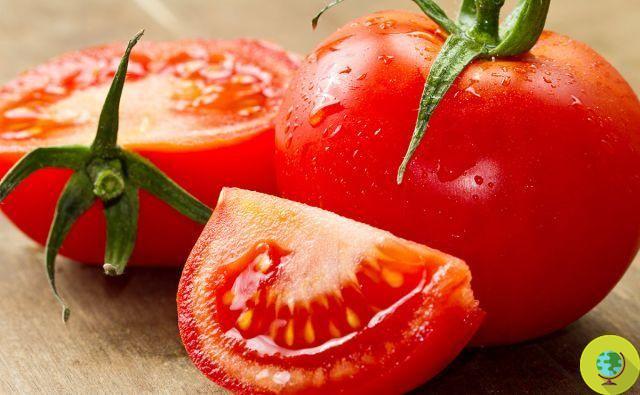 A new study confirms the fact that tomatoes, thanks to lycopene, reduce the risk of stroke


Eat tomatoes and food a tomato base reduces the risk of ictus. Research published yesterday on Neurology, conducted by scientists fromUniversity of Eastern Finland. And the merit would be of an antioxidant substance contained in them, the lycopene.

The latter is present in larger quantities especially in red and ripe tomatoes. The Finnish study found that people with the highest amount of lycopene in their blood had 55 percent less more likely to suffer from a stroke, compared to those with lower blood lycopene values.

The study involved 1.031 men in Finland aged between 46 and 65. The level of lycopene in the blood was tested at the start of the study and the volunteers were followed up for an average of 12 years. During that time frame, 67 men had a stroke. Of the subjects with the lowest levels of lycopene, 25 out of 258 men had had a stroke. Of those with the highest levels of lycopene, only 11 out of 259 experienced the same fate, less than half.

When the researchers looked only at strokes caused by blood clots, the results were even more stark. Those with the highest levels of lycopene were 59 percent less likely to have a stroke than those with the lowest levels.

"This study adds more evidence that a diet rich in fruit and vegetables is associated with a lower risk of stroke," said the study author. Jouni Karppi, of the University of Kuopio. "The findings support the recommendation that people should consume more than five servings of fruit and vegetables per day, which could lead to a sharp reduction in the number of strokes worldwide, according to previous studies as well."

A similar conclusion was reached over a year ago by another research, this time conducted in Australia, according to which the tomato is also a natural remedy to fight the cholesterol high and thehypertension, especially if eaten cooked and hired on a regular basis.

add a comment of Tomatoes: goodbye stroke, thanks to lycopene