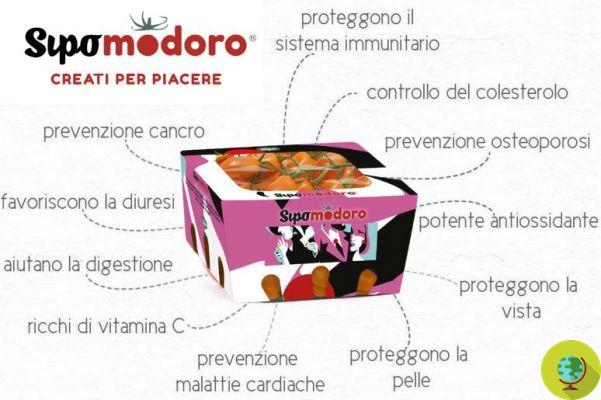 Tomatoes, calories and benefits. Tomatoes, botanically considered as full-blown fruits, are considered one of the symbolic vegetables of the summer season, in which they reach their full ripeness. The summer months are the ideal time to get the family together and try your hand at preparing homemade tomato sauce in order to have stock in the pantry for the rest of the year.

Tomatoes, considered botanically as full-blown fruits, are considered one of the vegetables symbol of the summer season, in which they reach their full maturity. The summer months are the ideal time to get the family together and try your hand at preparing homemade tomato sauce in order to have stock in the pantry for the rest of the year. Let's discover benefits and calories from tomatoes.

I tomatoes can also be dried for the preparation of preserves in oil. That's why it would be good to consume more (except allergies to these vegetables and also paying attention to nickel allergy in some cases).

Tomatoes are rich in water, vitamins and minerals, but low in calories. Even those on a calorie restricted diet can usually consume tomatoes without any problems, since 100 grams of fresh tomatoes they only bring 18 calories. We take advantage of fresh tomatoes when they are in season to enrich our diet with these precious vegetables.

Benefits for the heart

The consumption of tomatoes is correlated to a decrease in the risk of incurring heart disease equal to 29%. The tomato, as long as it is of biological origin, is considered a real natural drug suitable for the prevention of diseases affecting the heart, and beyond.

Tomatoes are rich in vitamin C, an element considered fundamental in the proper functioning of our immune system, which our body should therefore take daily in order to protect itself from disease. The WHO indicates that the amount of vitamin C to be taken daily should be equal to 45 mg. 100 g of ripe tomatoes contain 25 mg, while 100 g of tomato paste contains 43 mg. (Source)

Il lycopene, a powerful antioxidant, is considered a highly protective food for our body against degenerative diseases related to aging processes. Lycopene protects us from genetic damage and consequent diseases. The content of lycopene in tomatoes is equal to 11mg / 100g in the pulp and 54mg / 100g in the peel. (Source)

The basic nutrients contained in tomatoes, including the aforementioned lycopene, give them some proven cancer preventive properties, with particular reference to cancers affecting the colon and prostate.

The consumption of tomatoes can be considered suitable for all those who need to undertake one Slimming diet. In fact, it seems that they contribute to helping the body in weight loss. This would happen because tomatoes would be able to stimulate the production of the amino acid carnitine, used by the body to transform lipids into energy.

In the opinion of some experts a shortage of lycopene in the period of menopause would be able to favor the onset of osteoporosis. It is therefore good to consume foods rich in lycopene at any age for preventive purposes (except for particular individual contraindications). In addition to tomatoes, lycopene is contained in foods such as watermelons, persimmons and grapefruits.

Tomatoes are regarded as foods that can help the body keep cholesterol levels under control in the blood. Their consumption is therefore considered suitable for those who have this need. Other foods that can contribute to lowering cholesterol are oats and spinach.

Tomatoes are benefits for the eyes and sight, which are able to protect due to their beta-carotene and lutein content, able to repair them from degenerative diseases. Broccoli, aubergines, pumpkins and courgettes are other foods particularly recommended for the protection of the eyes and visual capacities.

Tomatoes are capable of promote the good functioning of the intestine due to their content of vegetable fibres, such as hemicellulose and cellulose, which are particularly present in its peel. For this reason, the consumption of tomatoes is often recommended for those who suffer from constipation and a lazy bowel.

Due to its high water content, the tomato is capable of stimulate diuresis especially if it is eaten fresh and raw, without adding salt. Other typical summer foods that can promote the purification of the body by eliminating excess fluids are watermelons, melons and cucumbers.

Tomato: when cooked, an effective weapon against hypertension and cholesterol

- Pomì L +: the anti-aging super-tomato made in Italy on sale

Tomatoes: 10 ways to use it as a beauty remedy ❯

add a comment of Tomatoes: calories and 10 extraordinary beneficial properties