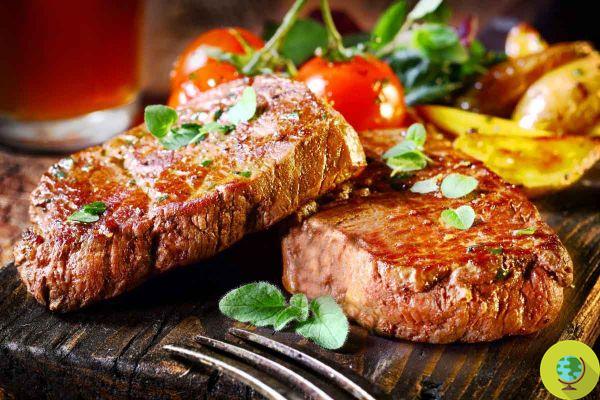 Meat is not very sustainable and pollutes, which is why a popular American site dedicated to food has decided to ban all beef recipes so as to protect the planet by helping to fight climate change.


The well-known website Epicurious announced a few days ago its choice that it defines as “pro-planet”: to eliminate all recipes based on red meat (specifically that of beef).

As David Tamarkin and Maggie Hoffman, former digital director and senior editor of Epicurious, respectively, explained in an article:

“That might not sound like much, but cutting out just one ingredient, beef, can have a huge impact in making a person's kitchen more environmentally friendly. Beef will not appear in new Epicurious recipes, articles or newsletters. It will not be displayed on our homepage. It will be absent from our Instagram feed "

It is therefore a very specific position that aims to encourage a more sustainable cuisine.

Today we announced that Epicurious is cutting out beef. It won’t appear in new Epi recipes, articles, newsletters, or on social. This isn’t a vendetta against cows or people who eat them. It’s a shift about sustainability; not anti-beef but pro-planet. https://t.co/yQ8PrtChtE

As they explained in the article announcing the new editorial-environmental line:

Read also: The devastating environmental impact of meat in a new shocking study

Of course, they point out, avoiding beef won't magically solve all problems. Even ruminant animals (such as sheep and goats) have significant and decidedly unsustainable environmental costs are then the production of chicken, seafood, soy and many other foods.

But somewhere we will have to start and not promoting more red meat recipes can actually be a significant first step. Among other things, according to what was declared by the leaders of Epicurious, it seems that the alternatives to beef are also well received by American chefs:

“For each hamburger recipe that we haven't published, we have instead entered a vegetarian recipe; rather than articles on ground beef, we talked about alternative meats. And last summer, when America's annual barbecue vacation came to an end, we lit our fires on cauliflower and mushrooms, not steaks and hot dogs. The numbers of traffic and involvement of these stories do not lie: when an alternative to beef is given, American cooks go hungry ”.

A choice that of Epicurious announced only now but which had actually been implemented for some time. However, some users did not like it and on Twitter harshly commented on the announcement to no longer publish recipes with beef.

Goodbye @epicurious. It was fun learning to cook with you when I was a young bride. Unfortunately, I don’t like to mix cooking with my politics. By the way, if you’re really serious about saving the planet, don’t start with cows, start with #China, the world’s worst polluters. https://t.co/tPYV3QKK5x

It is undoubtedly a contribution towards more sustainable food choices. While it is vital that top-down decisions are made that seriously address the issue of change, we must never underestimate the power of our individual actions.

Choosing alternatives to meat is a simple but powerful way to send a signal not only to companies and producers but also to those who have to make decisions that are now more urgent than ever.

“We now believe that part of the improvement means cooking with the planet in mind. If we don't, we will end up without any planet, ”Epicurious writes.