A team of scientists has identified the most extreme heatwaves ever recorded globally over the past 60 years: they are the alarm bells (gone unheard) of the climate crisis

In the last two, the populations of India and Pakistan are struggling with a hellish heat to say the least. In the Indian subcontinent, the thermometer touched 50 °. The hot anomalous and suffocating is bringing the agricultural sector to its knees and risking the lives of a million people.


Unfortunately, these events are becoming more and more recurrent, as evidenced by scientists. Just recently, a new study has been published, led by the University of Bristol, which predicts that heat waves will be more and more frequent. It is one of the many alarm bells of the climate crisis, that humanity has ignored for decades. In reality, these heatwaves are not such a recent phenomenon, although in recent years they have been of greater concern.

The record heatwaves of the last few decades

But which were the most extreme of all? According to what emerged from the British research, the most extreme heat waves in the history of the last 60 years were eight. The latest in chronological order is that recorded in British Columbia (Canada) last June 29, when the thermometers marked 49,6 ° C in the town of Lytton. In America, the prohibitive temperatures have caused hundreds of victims and devastating fires.

The recent heatwave in Canada and the United States has shocked the world. - comments climate scientist Dr Vikki Thompson of the University of Bristol - Yet we show that in recent decades there have been some even greater extremes. Using climate models, we also find that extreme heat events are likely to increase in magnitude over the next century, at the same rate as the local average temperature. 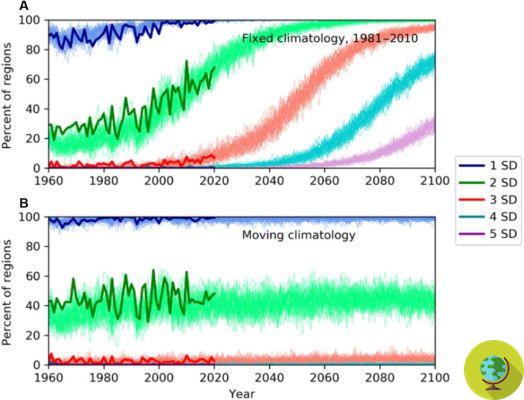 When and where did the other record heatwaves occur that should prompt us to reflect?

In addition to causing droughts, fires and imbalances in ecosystems, extreme heat represents a threat to human health, as pointed out by the study authors.

Climate change is one of the biggest global health problems of our time and we have shown that many heatwaves outside the developed world have gone largely unnoticed. - concludes Professor Dann Mitchell, lecturer at the University of Bristol - Nationally the phenomenon can cause thousands of deaths and countries that experience temperatures outside their normal range are the most susceptible to these shocks.

The climate crisis remains very serious, even if Antarctica recorded its coldest 6 months ever

The fossil fuel industry gets millions in funding every minute. The shock investigation